Undoubtedly, one of the most recognizable species of dinosaur is the gigantic Tyrannosaurus Rex or simply known as T- Rex. Numerous monumental replicas of T-Rex can be found all throughout the world specifically in “dinosaur parks”. T-Rex means ”king of the tyrant lizard”. Here’s a list of well-known species of dinosaurs.
Diplodocus

Diplodocus is a notable dinosaur species. This creature had the longest tail of all dinosaurs reaching up to 13 meters in length. Its name means “double beam”.
Sauroposeidon

Sauroposeidon is noted for its very long neck. It had the longest neck of all dinosaurs reaching a length of up to 1.2 meters for every individual vertebrae or neck bone. Its name means lizard Poseidon.
Utahraptor

Utahraptor is recognized as the fiercest of all dinosaur species. It measured around 7 meters and was very powerful, agile and intelligent predator. Its name means ’s predator.
Ornithomimid

Ornithomimid was as ostrich mimic tagged as the fastest dinosaur of all time. It can attain a speed of up to 60 km per hour. Its name means mimic lizard.
Hadrosaur

Hadrosaur is a dinosaur species with the most teeth. This herbivore had about 960 cheek teeth. Its name means duck-billed dinosaur.
Troodon

Troodon is believed to be one of the most intelligent dinosaurs. This smart hunting dinosaur is about 2 meters in length and had a brain the size of a mammal of today. It had stereoscopic vision and grasping hands.
Stegosaurus Stegosaurus is considered as the dumbest dinosaur. The size of its brain is the size of a walnut and measures 3 cm and weighed 75 grams only. Its name means roof lizard.
Amphicoelias fragillimus

Amphicoelias fragillimus is the longest and largest animal to have existed on Earth. Its length ranged from 40 meters to 60 meters and weighed as much as 122 metric tons.
Brachiosaurus Brachiosaurus is the largest of all dinosaurs. It had a length of up to 23 meters and a height of up to 12 meters equivalent to a four-story building. Its name means arm lizard.
Compsognatus

Compsognatus is the smallest of all dinosaur species. It had a length of  1 meter and weighed about 2.5 kg. Its name means pretty jaw.
Megalosaurus

Megalosaurus was the first dinosaur to be named. The name of this large meat-eating therapod dinosaur means “great lizard”. It was about 9 meters in length and 3 meters in height.
Khaan

Khaan is a species of dinosaur with the shortest name. Fossils of this creature were found in and its name means “lord: in Mongolian.
Microphachycephalosaurus Microphachycephalosaurus has the longest name of all the dinosaur species. It was found in and its name means “tiny thick-headed lizard”.
Coelphysis Coelphysis was a dinosaur that lived during the Triassic period. This carnivore was found in and its name means “hollow form”.
Pliosaur

Pliosaur is an enormous marine dinosaur species discovered in . It had an estimated length of up to 15 meters. This creature was named “The Monster”. Pliosaur means “more lizard”.
Velociraptor

Velociraptor is a carnivorous dinosaur species found in in . Its name means “quick plunderer”
Lesothosaurus 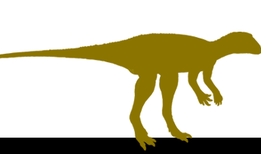 Lesothosaurus is a notable species of dinosaur found in , . This plant-eater lived 200 million years ago.
Herrerasaurus

Herrerasaurus was a carnivorous dinosaur that lived during the Triassic period. It was found in , and its name means “Herrera’s lizard”.
Argentinosaurus Argentinosaurus is one of the largest and heaviest dinosaurs that ever existed. It was found in , . This very huge animal's length is estimated from 30 to 35 meters long and can way as much as 110 short tons. It is also known as Silver Lizard.
Triceratops

Triceratop is a dinosaur bearing a large bony frill and three horns on its large four-legged body. It is one of the most recognizable of all dinosaurs and the best known ceratopsid. It shared the landscape with and was preyed upon by the fearsome T-Rex.
See also
Top Ten Most Amazing Dinosaurs
Posted by Nobert at 7:06 PM No comments:

The Most Amusing and Bizarre Facts and Traits of Mammals IV

More mammals and their amazing traits and behaviors
1.) Nine-banded Armadillo

The Nine-banded Armadillo is an amazing mammal. It can give birth to identical quadruplets and postpone pregnancy for three years.
2.) Rat Rats have flexible bones that make them capable of surviving of falling down from the second floor of a building. And they will continue to be nuisance to humans because they are immune to large amounts of poison.
3.) Kangaroo Rat

Kangaroo Rats are prolific jumpers. They can jump 45 times their body length. If they were as large as we are, they could clear easily a football with a length of 90 meters.
4.) Opossum

Opossums are amazing animal. They can play dead for six hours.
5.) Bat

Many cultures say that bats are associated with vampires.
6.) Hare

Hares are great sprinters. They are twice as fast as an Olympic sprinter.
7.) Blue Whale

A young Blue Whale is a huge baby. It is the size of a small car. A Blue Whale has a large size as well as a large appetite.
8.) Kangaroo

Kangaroos are very fast jumpers. They move at 56 km/h, they can sprint 100 meters in 4 seconds and leap 9.1 meters in the long jump.
9.) Guanaco Guanacos are amazing creatures. They are among the toughest animals in the world. They thrive at 20,000 feet above sea level without getting sick.
10.) Camel

Camels are tough animals. They can lose 40% of their body weight in water, and survive without drinking water for eight long days.
See also
Posted by Nobert at 5:39 PM No comments: 10.) Klipspringer
See also
Posted by Nobert at 5:45 PM No comments:


These unique creatures are often kept as pets and zoo attractions. Which of these bizarre primate will you choose as pet? Pick your choice.

Most primates live in tropical or subtropical regions of the Americas, Africa and Asia. Primates range in size from the 30-gram or 1 oz Pygmy Mouse Lemur to the 200-kilogram or 440 lb Mountain Gorilla.

Filipino readers will surely smile upon reading the name of this rather colorful but unusual species of monkey called Red-bellied Titi. The word "titi" in the Filipino language means "male sex organ". It is endemic to Brazil. Scientifically named Callicebus moloch, it is a species of New World Monkey.

Some mammals are simply amazing.
1.) Tiger