The Most Beautiful and Distinctively Colorful Hermit Crabs in the World

There are about 1,100 species of “hermit crabs” in the world. These decapod crustaceans of the superfamily Paguroidea possess an asymmetrical abdomen which is concealed in an empty gastropod shell that is carried around by the hermit crab.
Here are some of the most colorful Hermit Crabs in the world.
1.) Elegant Hermit Crab (Calcinus elegans)

Image Source
Calcinus elegans is one of the most beautiful and most colorful species of hermit crabs in the world. It can be found I, the Indian Ocean and in the .
2.) Red Reef Hermit Crab (Paguristes cadenati)

Image Source
The lovely-looking Red Reef Hermit Crab or Scarlet Hermit Crab is a small but colorful crustacean. It grows about 3 centimeters across on the average. This hermit crab with bright red body and yellow eyestalks can be found in the .
3.) Dardanus calidus

Image Source
Dardanus calidus is an attractive hermit crab that grows to a length of 12 cm and uses large gastropod shells of Charonia species and Tonna galea. This shell is often decorated with one or more sea anemone. It feeds on decaying matter from the sea bed.
4.) Common Hermit Crab (Pagurus Bernhardus)

Image Source
Common Hermit Crab can be found in the European Atlantic’s coasts. It is also known as Soldier Crab and can grow about 3.5 cm. it inhabits sandy and rocky areas from down to southern .

Image Source
This crustacean is an opportunistic scavenger of carrion and uses several shells of different gastropods.
5.) Coenobita violascens 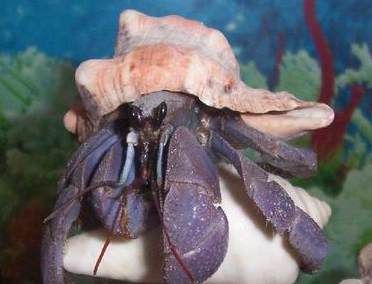 Image Source
Coenobita violascens is a beautiful and colorful species of land hermit crab. It is endemic to the , , , and .
6.) White Spotted Hermit Crab (Dardanus megistos)

Image Source
The brightly-colored White-spotted Hermit Crab can be found on the reefs of Indian Ocean and Pacific Ocean from Africa to the South China Sea and . It can grow up to a length of 20 cm.
7.) Tricolor Hermit Crab (Clibanarius tricolor) Image Source
The beautifully-colored Tricolor Hermit Crab can be found in the . It is also commonly name as Blue-legged Hermit Crab.
8.) Anemone Hermit Crab (Dardanus pedunculatus)

Image Source
The unique Anemone Hermit Crab is a crustacean that inhabits the Indo-Pacific region. It lives at depths of up to 27 m and collects sea anemones to place on its shell for defense.
9.) Halloween Hermit Crab (Ciliopagurus strigatus)

Image Source
The beautifully-colored Halloween Hermit Crab is a hermit crab species native to the Indo-Pacific region. It is also known as the Striped Hermit Crab or Orange Legged Hermit Crab.
See also
Posted by Nobert at 2:30 PM