Unique and Weird Rodents in the World

There are hundred different species of rodents from all over the world. Take a look at the freakiest and weirdest rodent species on the planet.
1.) North American Porcupine (Erethizon dorsatum) Image Source
The North American Porcupine is a large odd-looking rodent slightly smaller than the Beaver. It is also known as Canadian Porcupine or Common Porcupine.
2.) Pacarana (Dinomys branickii)

Image Source
The Pacarana is cool-looking but rare and slow-moving nocturnal rodent found only in tropical forests of the Andes Mountains. It has a chunky body and is large for a rodent, weighing up to 15 kg and measuring up to 79 cm length, excluding its thick, furry tail.
3.) Northern Viscacha (Lagidium peruanum)

Image Source
The Northern Viscacha is an awesome-looking rodent species with very long furry tail that makes it look adorable. It can be found in Chile and Peru in South America. It can be found too in Bolivia.
4.) Capybara (Hydrochoerus hydrochaeris)

Image Source
The unique-looking Capybara has a heavy, barrel-shaped body and short head with reddish-brown fur on the upper part of its body that turns yellowish-brown underneath. It can grow up to 130 cm or 4.3 ft in length and can attain a weight of up to 105.4 kg or 232 lb.This animal is preyed upon by Green Anacondas.
5.) Bi-colored-spined Porcupine (Coendou bicolor)

Image Source
The Bi-colored-spined Porcupine is a weird-looking rodent endemic to Bolivia, Colombia, Ecuador and Peru. The body of the South American rodent is covered with dense spines that make it looks weird. The color is pale yellow at the base and black-tipped, and significantly darker on the mid-back. Its tail is free of spines.
6.) Prehensile-tailed Hutia (Mysateles prehensilis)

Image Source
The Prehensile-tailed Hutia is a unique-looking rodent species native to Cuba. It is a threatened species.
7.) Desmarest's Hutia (Capromys pilorides) Image Source
Desmarest's Hutia is the largest hutia species growing up to 60 cm. It is endemic to Cuba hence it is also known as the Cuban Hutia. These animals were traditionally hunted for food. In a few places they were raised in barns and used as a minor stock animal. It is now illegal to hunt or kill hutias without a permit.
8.) Jamaican Coney (Geocapromys brownii) 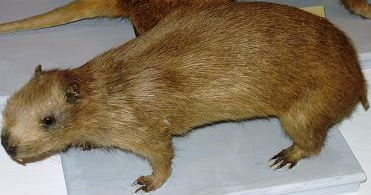 Image Source
The Jamaican Coney is a pretty terrestrial land mammal found in the rocky, forested areas of Jamaica. It is also known as the Jamaican Hutia and is native to the island and is the only extant native land mammal on Jamaica besides bats.
9.) Southern Viscacha (Lagidium viscacia) Image Source
The Patagonian Mara is a large rodent which is also known as the Patagonian Cavy or Patagonian Hare. It is an herbivore that resembles a rabbit and can be found in Argentina and parts of Patagonia.
11.) Central American Agouti (Dasyprocta punctata)

Image Source
The Central American Agouti is a handsome-looking rodent Native to Central America from Chiapas, Yucatan Peninsula to Ecuador, Colombia and Venezuela.
See also
The Most Beautifully and Uniquely Colored Mammals in the World
World’s Most Venomous Mammals
Posted by Nobert at 2:40 PM