Image Source
Texas Coral Snakes are brightly-colored venomous snake of the . Their traditional coloration is black, yellow and red banding. These lovely-looking but deadly snakes can attain a length of up to 100 cm. Texas Coral Snake venom is a powerful neurotoxin and causes neuromuscular dysfunction. Death was primarily due to respiratory or cardiovascular failure.
2.) Eastern Coral Snake (Micrurus fulvius)

Image Source
Another colorful but dangerous snake is the venomous Eastern Coral Snake. It is also commonly known as Common Coral Snake or American Cobra.It is endemic to the .

It is capable of growing to a length of up to 122 cm. Females are usually longer than males.
3.) Red Spotted Pitviper (Trimeresurus jerdonii xanthomelas)

Image Source
The Red Spotted Pitviper is a brilliantly colored venomous snake native to Central and . It is characterized by bright red spots all over its body combined with yellow and black coloration.
4.) Blue Malayan Coral Snake (Calliophis bivirgatus)

Image Source
The beautiful Blue Malaysian Coral Snake is a colorful venomous snake that can be found in , , , and . It can attain a length of up to 140 cm or 5 ft. 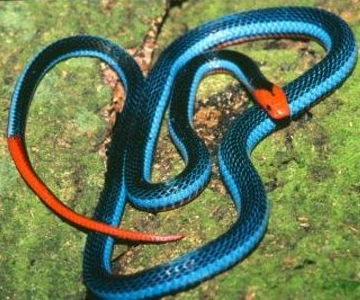 The color is indigo or deep blue with light blue or white stripes along each side of the body. The head, venter, and tail are bright red. The venom is very potent and has caused deaths. Victims may feel numbness near the wound and lip and death is a result of respiratory failure. The venom glands of this species are exceptionally long and extend beyond the jaw for one-third the length of the body
5.) Pitviper (Trimeresurus albolabris)

Image Source
This attractive snake comes in two colors. The one on the above photo is the yellow phase. It can be found in the Wetar Island, Indonesia.

Image Source
The second phase is the green with yellow stripes and the tail is red. It can be found in the islands of Java, and neighboring islands. These snakes are dangerous because they are venomous.
6.) Boomslang (Dispholidus typus) Image Source
The Boomslang is a small, colorful but venomous reptile endemic to sub-Saharan . Its name means “tree snake” - “tree” (boom) and “snake” (slang). This snake has highly potent venom, which it delivers through large fangs that are located in the rear of the jaw. Boomslangs may open their jaws 90 degrees when biting. The venom of the Boomslang is primarily a hemotoxin; it disables the blood clotting process and the victim may well die as a result of internal and external bleeding.
7.) Yellowbelly Sea Snake (Pelamis platura)

Image Source
Yellowbelly Sea Snake is an attractive snake but dangerously deadly because it is venomous. It can be found in tropical oceanic waters all over the world. Its venom is highly potent and is potentially lethal. "This snake is about 10 times more venomous than the Egyptian Cobra. It is also commonly called Pelagic Sea Snake or the Yellow-bellied Sea Snake.
8.) Krait (Laticauda laticaudata) Image Source
The Krait is a colorful venomous sea snake that can be found in the Indian Ocean, , and many others. It is capable of attaining a length of up to 110 cm.
9.) Eyelash Viper (Bothriechis schlegelii) Image Source
The Eyelash Viper is a brightly colored but venomous snake of Central and . These snakes are characterized by their wide array of color variations, as well as the superciliary scales over the eyes. They are often displayed in zoos. It can grow up to 75 cm or 2.5 feet in length. Despite the inherent danger of its venom, it is frequently available in the exotic animal trade. It is frequently captive bred for color and pattern.
Its other common names include Eyelash Mountain Viper, Schlegel's Viper, Schlegel's Palm Viper, Eyelash Snake, Horned Palm Viper, Eyelash Pit Viper, Schlegel's Pit Viper, Eyelash Palm-pitviper and also known as Bocaracá in and other Latin American countries
10.) Yellow Blotched Palm-Pitviper (Bothriechis aurifer)

Image Source
The cool-looking Yellow-blotched Palm-pitviper, also commonly known as Guatemalan Palm Viper, is a colorful and uniquely patterned venomous snake of and . It can attain a length of up to more than 1 meter.
See also
The World’s Most Colorful Snake
World’s Most Venomous Snakes
Posted by Nobert at 4:08 AM