Butterflies are amongst the most captivating and attractive flying creatures on the planet. As a manifestation of its beauty and elegance, there are hundreds of thousands of butterflies collectors from around the world.
Here’s a list of the largest butterflies in the planet. Two of them are from the . These winged-creatures are not just large they are also colorful and beautiful and they are among the most sought after species. 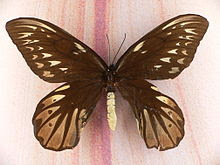 Image Source
Queen Alexandra’s Birdwing or Ornithoptera alexandrae is the world’s largest butterfly. It was named for Queen Alexandra, wife of King Edward VII of . Female species are larger than males with wingspan than can reach 31 cm and a body length of 8 cm. it can attain a weight of up to 12 grams. This gigantic butterfly can only be in the forests of in . This species is critically endangered.
Goliath Birdwing 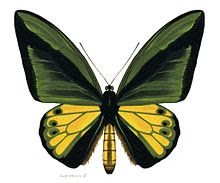 Image Source
The Goliath Birdwing or Ornithoptera goliath is the world’s second largest butterfly. It can only be found in and has a wingspan up to 28 centimeters. The females are typically larger than the male like the Queen Alexandra’s Birdwing. The Goliath Birdwing takes an approximate 15 minutes to emerge from its chrysalis because of its large wings.
African Giant Swallowtail

Image Source
The African Giant Swallowtail, which is almost as large as the Goliath Birdwing, is the world’s largest butterfly with a wingspan of 23 cm. It is scientifically named Papilio antimachus and is the largest butterfly in continental . The female is smaller than the male. The butterfly has no natural enemies because it is very toxic, perhaps the most toxic of all butterflies.
Opalescent Birdwing 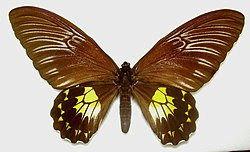 Image Source
Palawan Birdwing or Trogonoptera trojana is a large butterfly native to in the Philippine. It has a wingspan of about 18 cm and flies the whole year. It ties with the Rippon’s Birdwing and Buru Opalescent Birdwing as the world’s 4th largest butterfly.
Rippon’s Birdwing 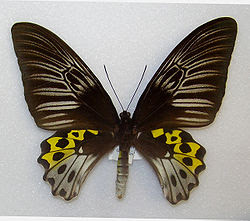 Image Source
Together with the Palawan Birdwing and Buru Opalescent Birdwing, the Rippon’s Birdwing is regarded as the world’s fourth largest butterfly. Scientifically known as  Troides hypolitus, it has a wingspan of up to 20 cm.
Chimaera Birdwing 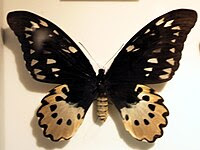 Image Source
Chimaera Birdwing or Ornithoptera chimaera is a large butterfly that can be found also in mountain areas of and the of in . It is usually found above 1000 meters above sea level. Females are larger than males and usually reach a wingspan of 18 cm making them the world’s 6th largest butterflies.
Ornithoptera Croesus lydius 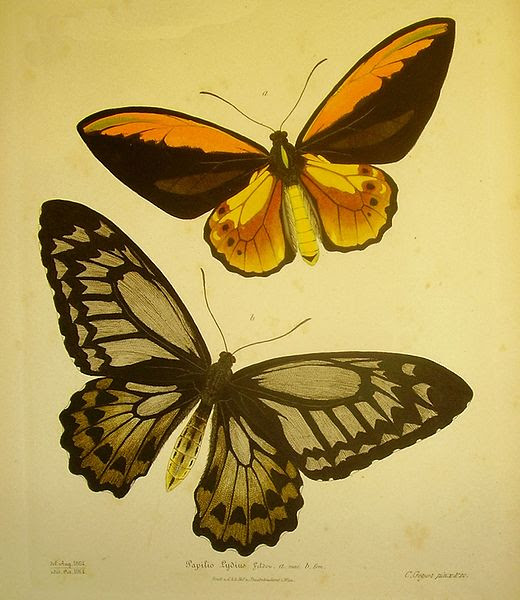 Image Source
Ornithoptera Croesus lydius is a large butterfly that can only be found in the of . The price of a dead Ornithoptera Croesus lydius is worth $200. This rare birdwing lives in the forests of the swampy lowlands. The rich orange color on the males has made this a much sought after species. It ties with Chimaera Birdwing and two others as the 6th largest butterfly in the world.
Magellan Birdwing 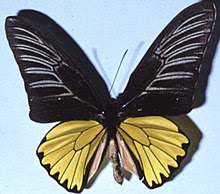 Image Source
The Magellan Birdwing or Troides magellanus is one of the word’s 6th largest butterflies. This large and striking birdwing butterfly can be found in the and in Orchid Island of Taiwan. Obviously, this butterfly is named for the explorer Ferdinand Magellan who was killed in the in 1521.
Miranda Birdwing 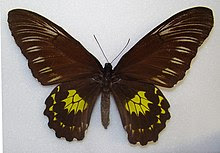 Image Source
Sharing the honor for being one of the 10 largest butterflies in the world is the Miranda Birdwing or Troides Miranda. This birdwing butterfly can be found in Sumatra and in .
See also
Posted by Nobert at 1:46 AM 1 comment:

The Most Toxic and Deadliest Spiders in the World

Beware of these arachnids. Some of these spiders are aggressively dangerous and deadly. They are rank according to their lethal potential – their venom yield divided by their venom potency.
Here they are… the world’s most venomous spiders.
Banana Spider 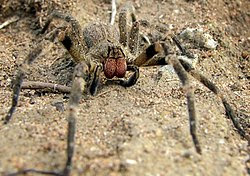 Image Source
Banana Spider is scientifically called Phoneutria spp. It is also known as the Brazilian Wandering Spider. It was so-named because it wanders the floor of the forest at night instead of staying on its web. This highly aggressive creature is considered by the Guiness World Records as the world's most venomous spider. It can be found in Central and . It is known in Portuguese as Aranhas-armadeiras  which means Armed Spider
Sydney Funnelweb Spider 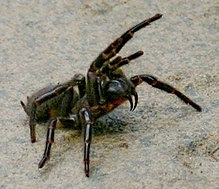 Image Source
The Sydney Funnelweb Spider or Atrax robustus is ’s deadliest spider and one of the most venomous in the world. This Australian critter is very deadly and can kill in minutes. This medium-to-large spider with a body length ranging from 2 cm to 7 cm is glossy and darkly colored. There is at least one recorded case of a small child dying within 15 minutes of a bite from a funnel-web spider but since the antivenom was developed in 1980, there have been no recorded fatalities.
Wolf Spider 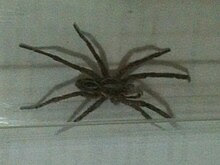 Image Source
The Wolf Spider, formally named Lycosa raptorialerythrognata is a venomous species of spider that can be found in Central and . It is known as Aranha de grama in the .
Black Widow

Image Source
The Black Widow or Latrodectus sp. can be found worldwide. It was so-named due to the behavior of the female of eating the male after mating. The Black Widow Spider is known for the neurotoxic venom latrotoxin it injects which is a comparatively dangerous spider bite, resulting in the condition latrodectism. The female Black Widow's bite is particularly harmful to humans because of its unusually large venom glands; however, Latrodectus bites rarely kill human beings if their wounds are given medical treatment.
Violin Spider 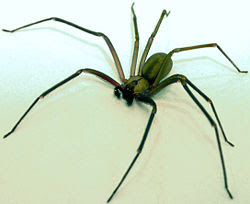 Image Source
The Violin Spider, also known as Recluse Spider, is a venomous spider that can be found in many parts of the world. It is scientifically called Loxesceles recluse. It size ranges between 6–20 mm but may grow larger. This arachnid usually has marking on the dorsal side of its cephalothorax, with a black line coming from it that looks like a violin with the neck of the violin pointing to the rear of the spider, resulting in the nicknames Fiddleback Spider, Brown Fiddler or Violin Spider.
Sac Spider 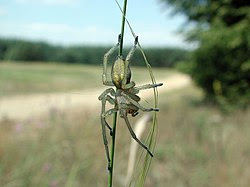 Image Source
The sac Spider or Cheiracanthium punctoriom can be found in Central Europe and central . It can grow up to 15 cm in length. The bite of this venomous spider is similar to a wasp sting, perhaps a bit more severe, although susceptible persons can have stronger reactions, like nausea. It is the only toxic spider in and can only be found in Kaiserstuhl region.
*Tarantulas 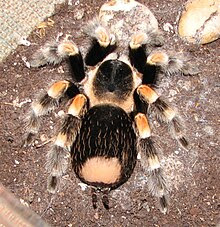 Image Source
Tarantulas are perhaps the most popular spiders in the world. These creepy-looking critters are becoming popular pets and are readily available in captivity. The four known most venomous Tarantulas in the world are Eurypelma rubropilosum, Acanthoscurria atrox, Lasiodora klugi and Pamphobeteus sp. Tarantulas are also called Athropodes. Despite their often threatening appearance and reputation, no Tarantula has been known to have a bite that is deadly to humans.
See also
Posted by Nobert at 8:58 PM No comments: