The two most popular striped mammals are the Tigers and Zebras. Aside from these two striped animals, can you name more stripes mammals?
Western Bongo 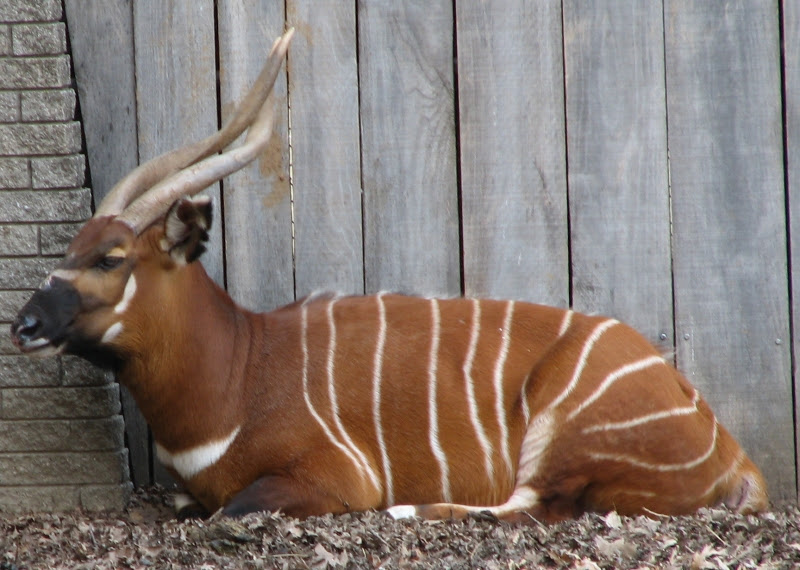 Image Source
Western Bongo or Tragelaphus eurycerus eurycerus is unique mammal with white-yellow stripes. This antelope with spiral horns is herbivorous is one of the largest African forest antelopes with both sexes having horns. 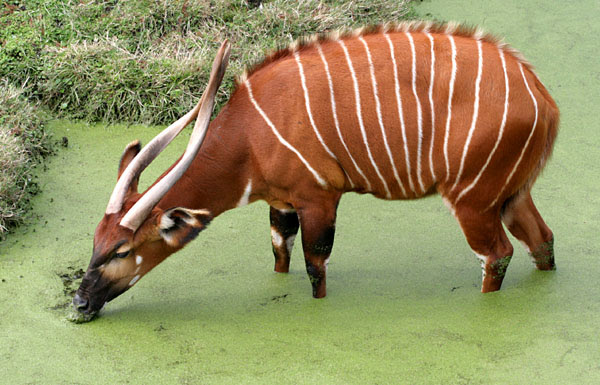 Image Source
Population of the Western Bongo declined over the past years and the IUCN Antelope Specialist Group considers it to be Near Threatened on the conservation status scale. It is also known as Lowland Bongo
Eastern Bongo 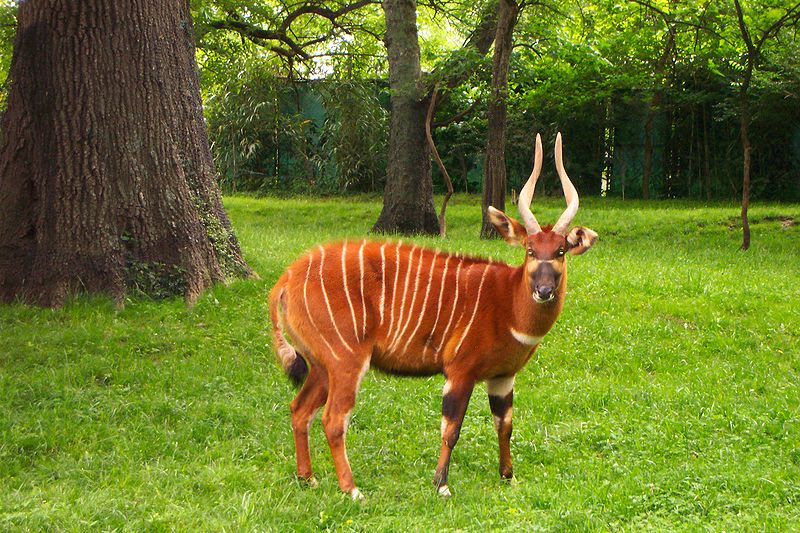 Image Source
The Eastern Bongo or T. eurycerus isaaci is a brightly-colored antelope notable for its stripes and more vibrant coat. It is endemic to Kenya and can only be found in the wild in a remote region in central Kenya. This critically endangered species is also known as Mountain Bongo.
Okapi 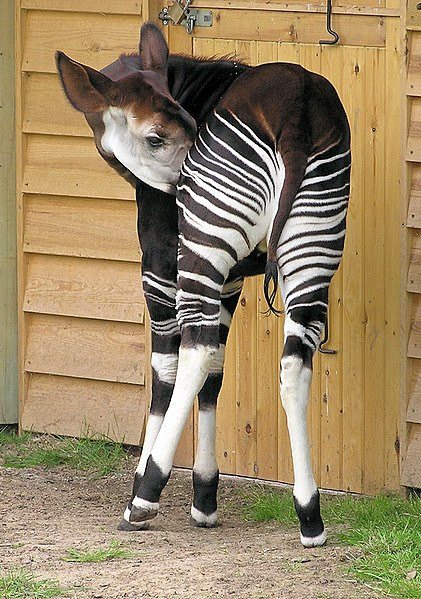 Image Source
The Okapi or Okapia johnstoni is a cool-looking striped mammal closely related to the Giraffe. It is endemic to the Ituri Rainforest of the Democratic Republic of Congo in Africa. Its markings resemble those of the Zebra.

Image Source
This beautifully colored animal is often seen on different zoos worldwide for display. Today there are up to 20,000 individuals in the wild. 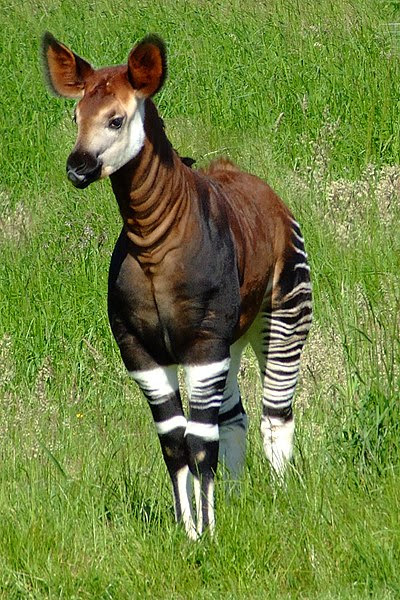 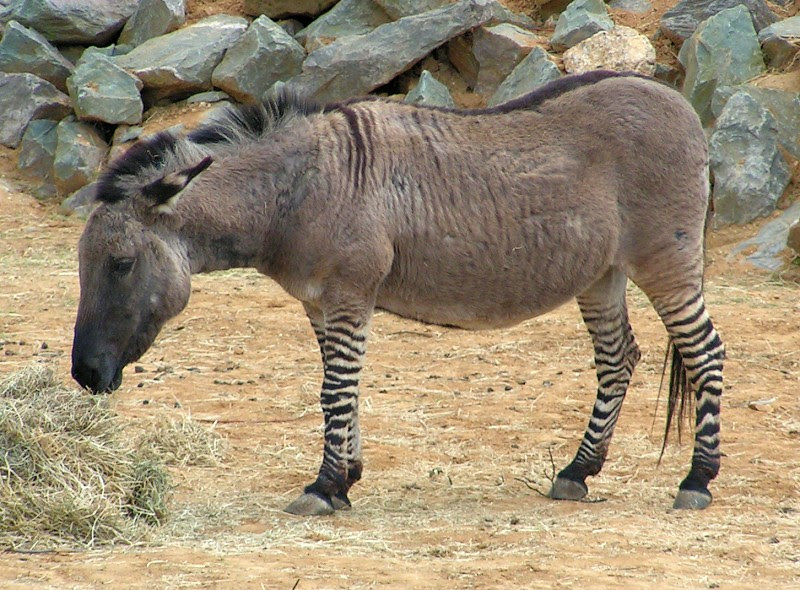 Image Source
A Zebroid is an animal with stripes on its legs. It is the offspring of any cross between a Zebra and any other Equine. Zebroid has been bred since the 19th century and is also called Zebra Mule and Zebrule.
Zorse 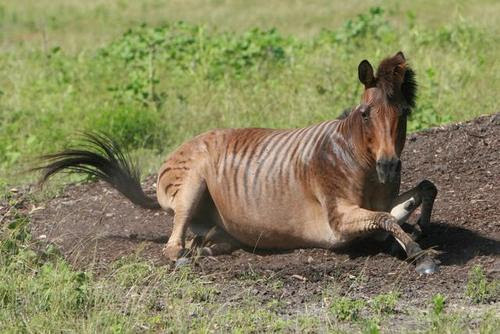 Image Source
The cross between a horse and a zebra is also called Zorse. The stripes of a Zorse generally do not cover the whole body and might be confined to the legs or spread onto parts of the body or neck.
Somali Wild Ass 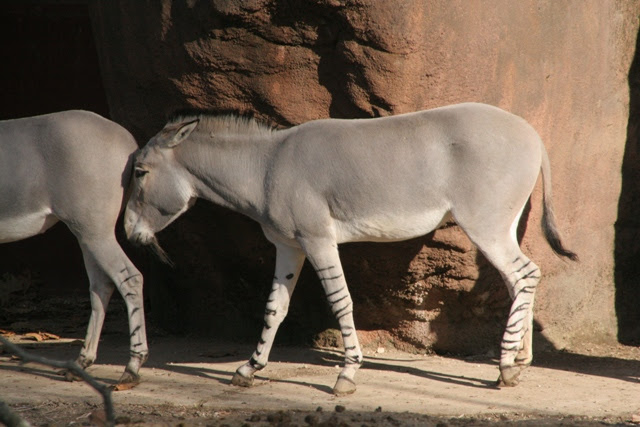 Image Source
Like Zebroids, Somali Wild Ass or Equus africanus somaliensis has stripes only on its legs. This unique mammal is endemic to Africa. 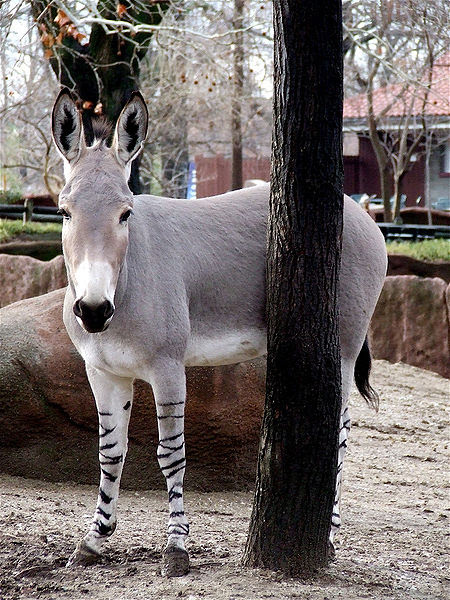 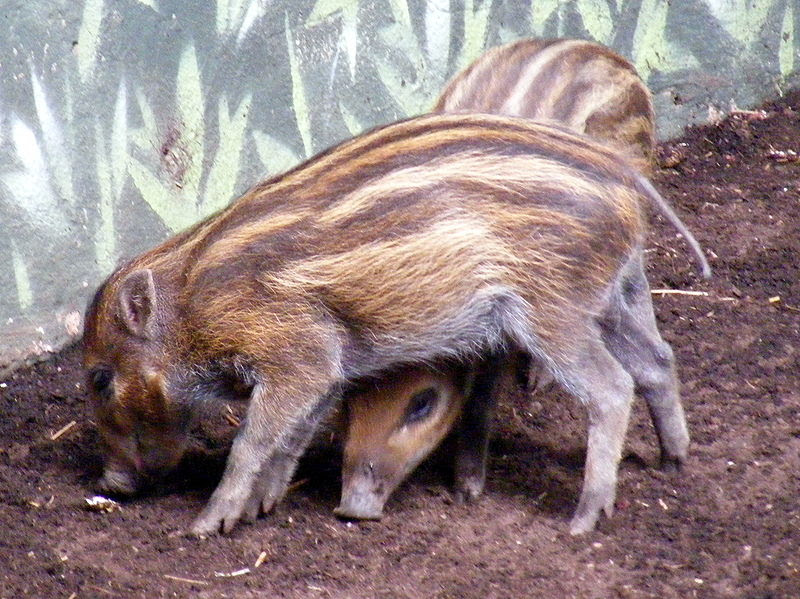 Image Source
Young Visayan Warty Pigs or Sus cebifrons look adorable for their stripes. This animal native to the Philippines is critically endangered species of pig. They are threatened by habitat loss, food shortages and hunting.
Juvenile Brazilian Tapir 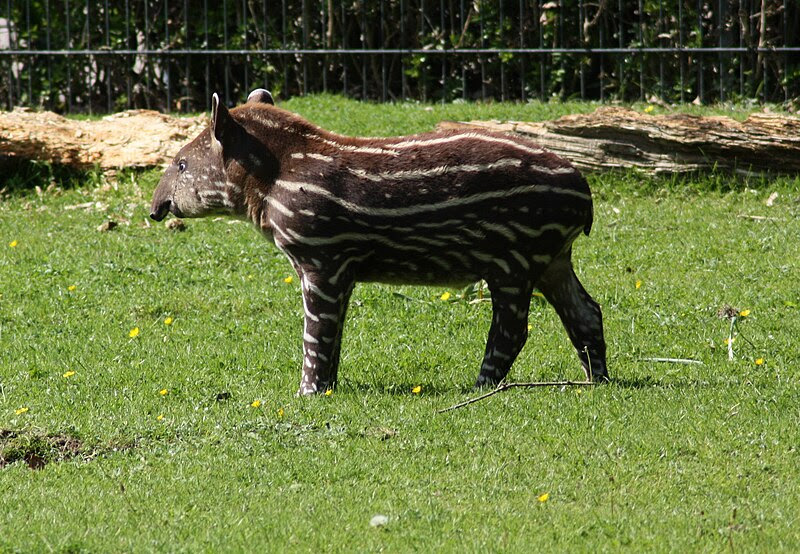 Image Source
Young South American Tapirs or Tapirus terrestris are unique for their stripes. It is also called Brazilian Tapir and is the second largest land mammal in South America next to the Baird's Tapir.
Greater Kudu 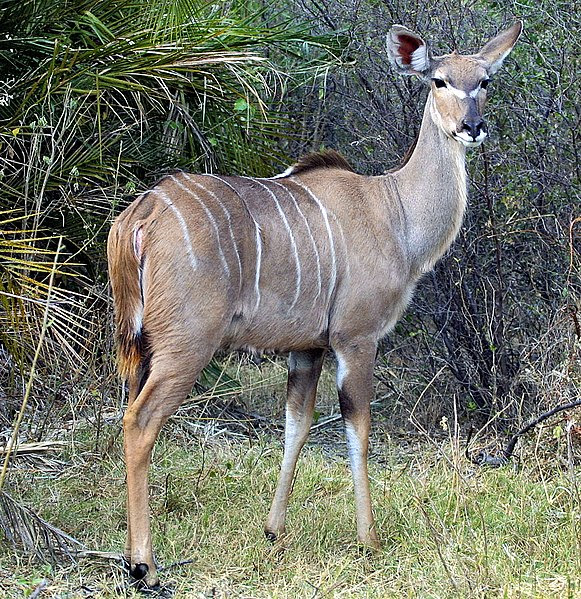 Image Source
The Greater Kudu or Tragelaphus strepsiceros is a striped antelope that inhabits woodlands of eastern and southern Africa. Their population is declining due to loss of habitat and hunting.
Lesser Kudu 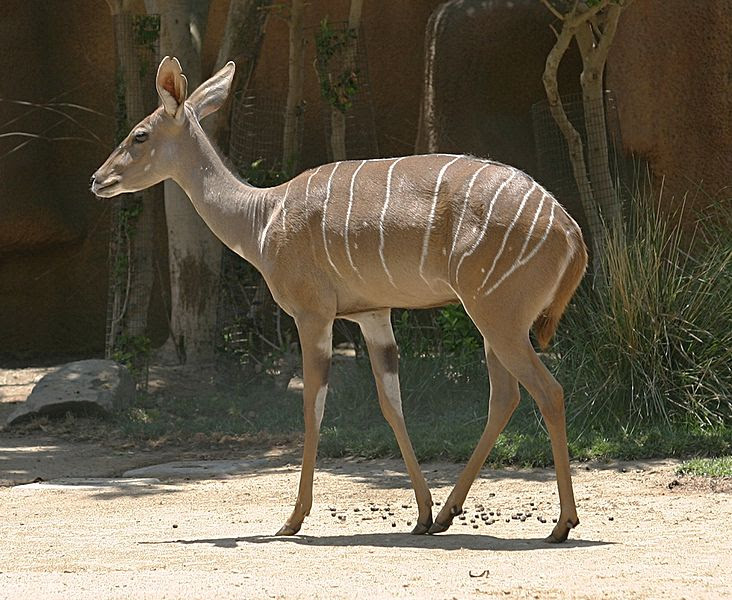 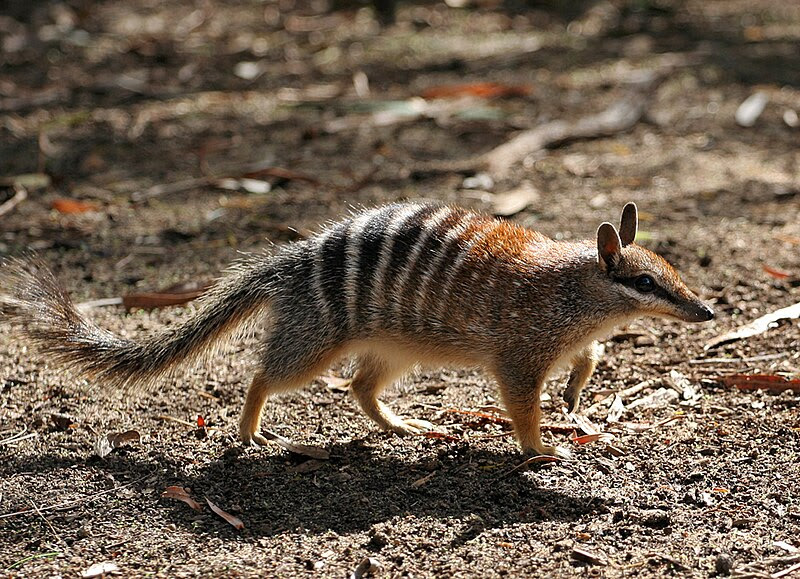 Image Source
The Numbat or Myrmecobius fasciatus is a striped small marsupial found in Western Australia. It diets consist almost exclusively of termites. It is also known as the Banded Anteater.
Mountain Nyala 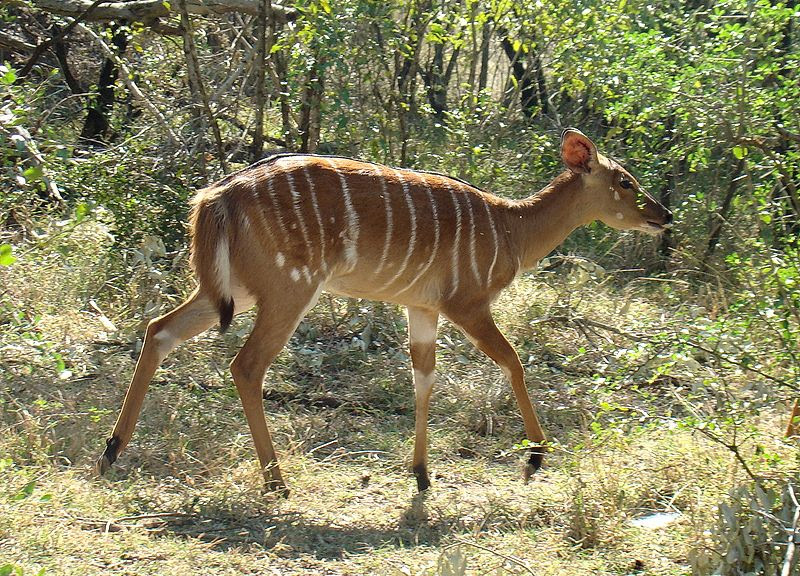 Image Source
Another striped antelope is the Nyala or Tragelaphus angasii. This Southern African antelope has spiral horns and can grow up to 110 cm. Female species are reddish brown with white vertical striping.
Giant Eland

Image Source
The Giant Eland or Taurotragus derbianus is a stripe antelope that can be found in countries of Africa such as Cameroon, Central African Republic, Senegal and Sudan. It is also known as the Lord Derby Eland and is an open forest savannah antelope.
See also
Posted by Nobert at 4:42 AM