The Most Beautiful and Spectacular Nests in the World

Nests are important to many birds and other animals to keep their eggs and to provide a place to live or raise offspring. Nests are usually made of some organic material like, grass, leaves, twigs or simply a depression in the ground, or a hole in a tree, rock or building.
The nest mounds built by Dusky Scrubfowls are the largest nest in the animal kingdom. They usually measure more than 11 m or 36 ft in diameter and stand nearly 5 m or 16 ft tall.
Hummingbird 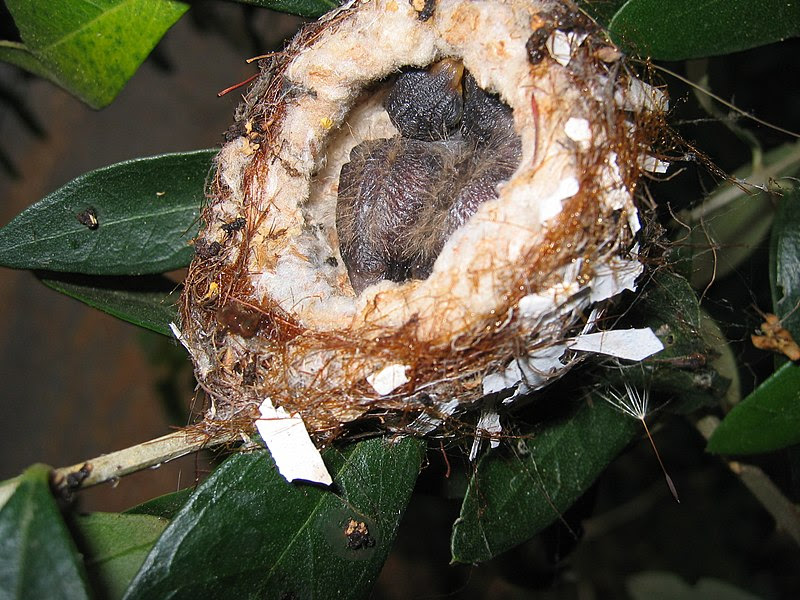 Image Source
The smallest bird nests are those of some Hummingbirds, tiny cups which are 2 cm across and 3 cm high. The beautiful Hummingbird nest with two chicks on the above photo was photographed in Santa Monica, California, USA.
Purple-crowned Fairy 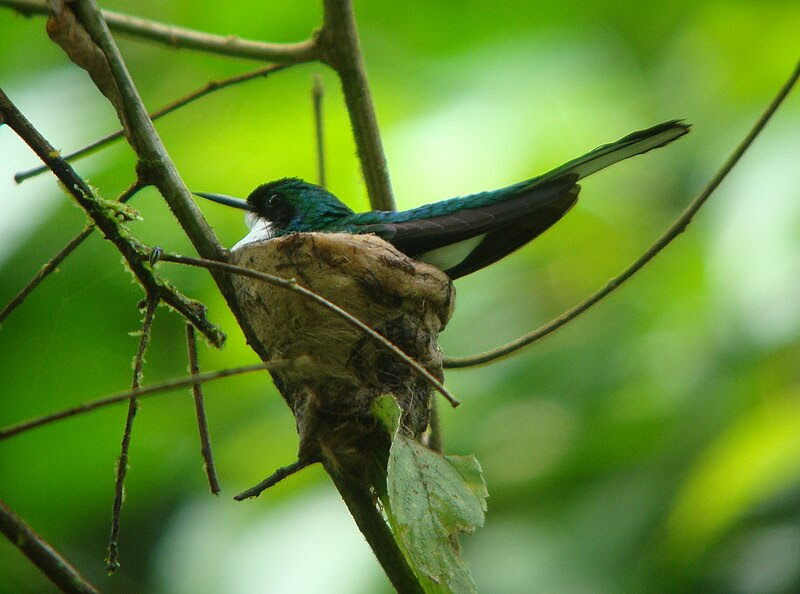 Image Source
The cute Cup type nest on the above photo belongs to a Purple-crowned Fairy. Like many other small birds, they use considerable amount of spider silk in their cup nest. Purple-crowned Fairy or Heliothryx barroti  can be found Mexico down to  Ecuador.
Pendant Nest 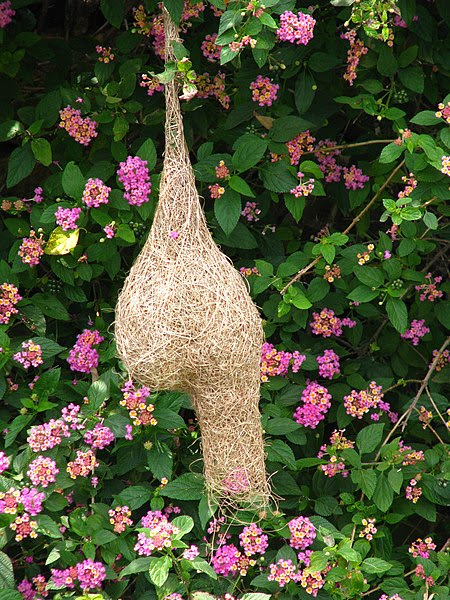 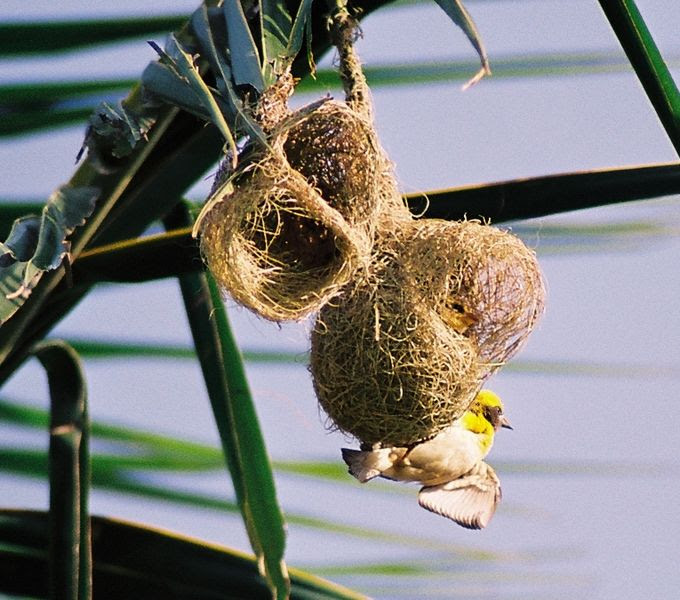 Image Source
The Baya Weaver or Ploceus philippinus is a great weaver of nest as evident of the intricately weaved and designed nest on the above and below photo. The hanging retort shaped nests woven from leaves by these South and Southeast Asian birds are usually found on thorny trees or palm fronds. 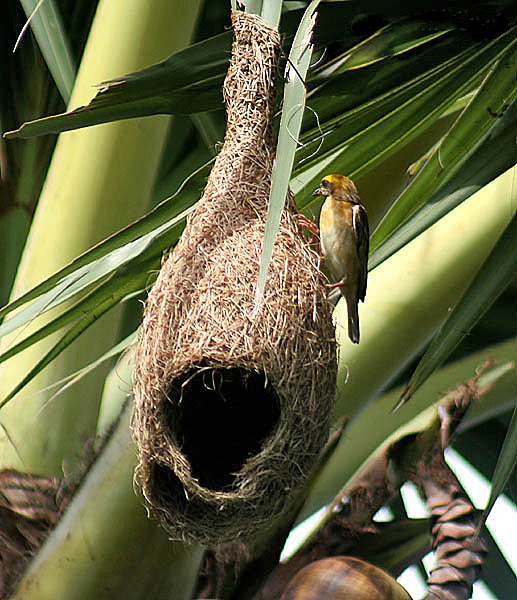 Image Source
The nests are often built near water or hanging over water where predators cannot reach easily.
Sociable Weaver 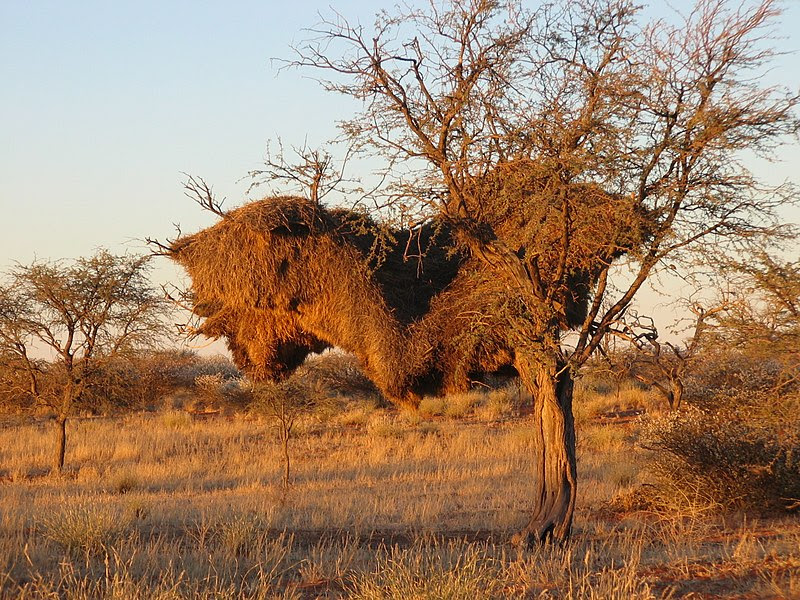 Image Source
The Sociable Weavers or Philetairus socius are impressive species of bird of Africa. They can be found in Botswana, Namibia and South Africa. Sociable Weavers build large compound community nests, a rarity among birds. 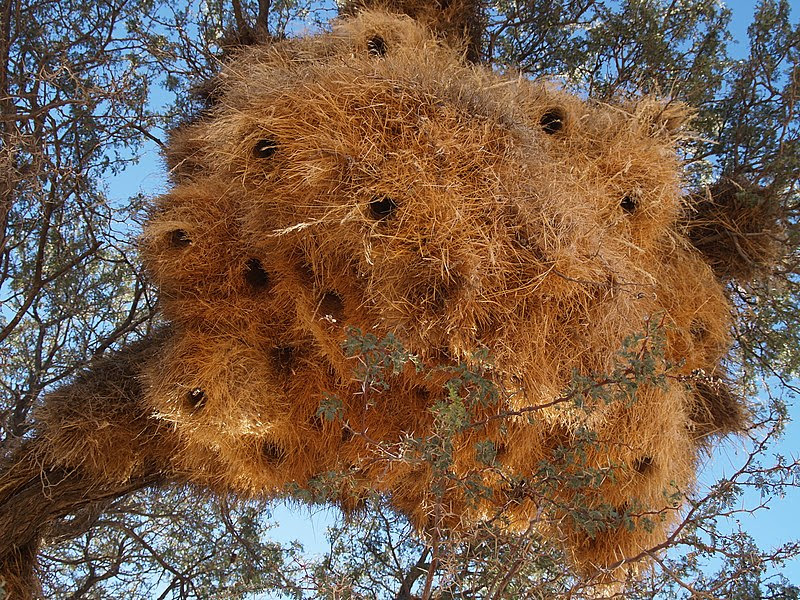 Image Source
The nests of Sociable Weavers are perhaps the most spectacular structure built by any bird. These amazing birds are also known as Social Weaver.
Thick-billed Weaver 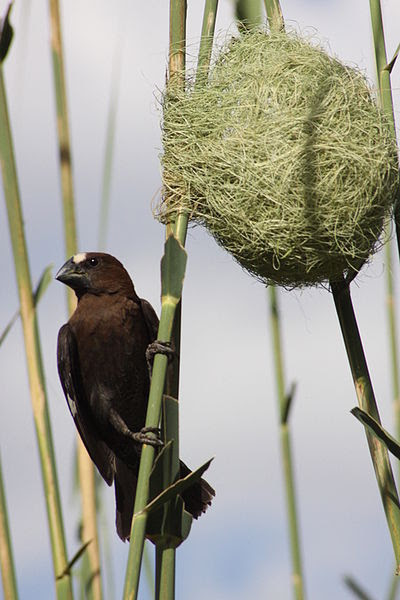 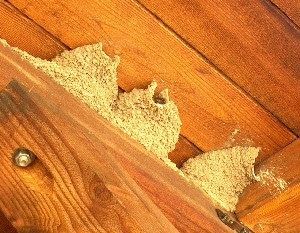 Image Source
Cliff Swallows are unique in building their nests. Unlike many bird species, they use mud as primary material in constructing their nests. 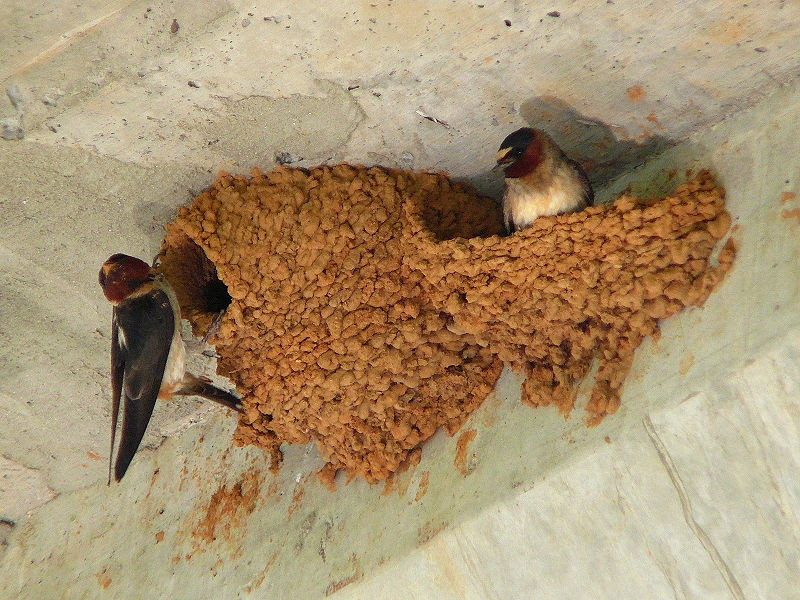 Image Source
The Cliff Swallow or Petrochelidon pyrrhonota is a passerine bird. 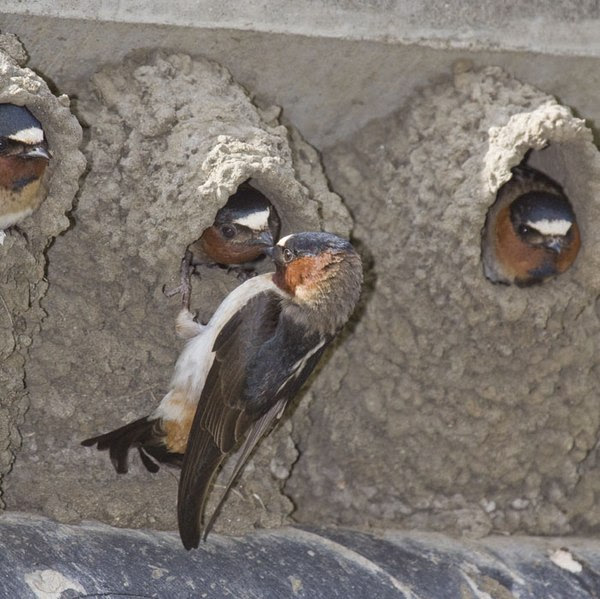 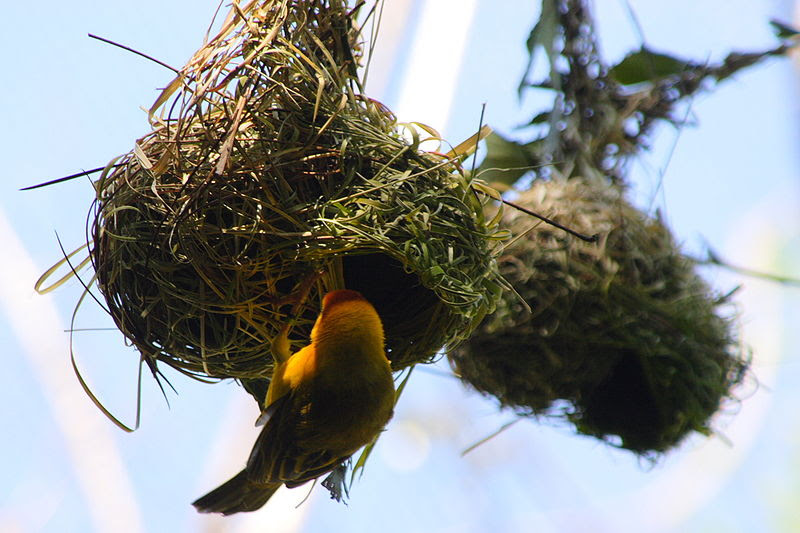 Image Source
Another great nest weaver is the Taveta Weaver or Ploceus castaneiceps. This species of bird can be found in Kenya and Tanzania. 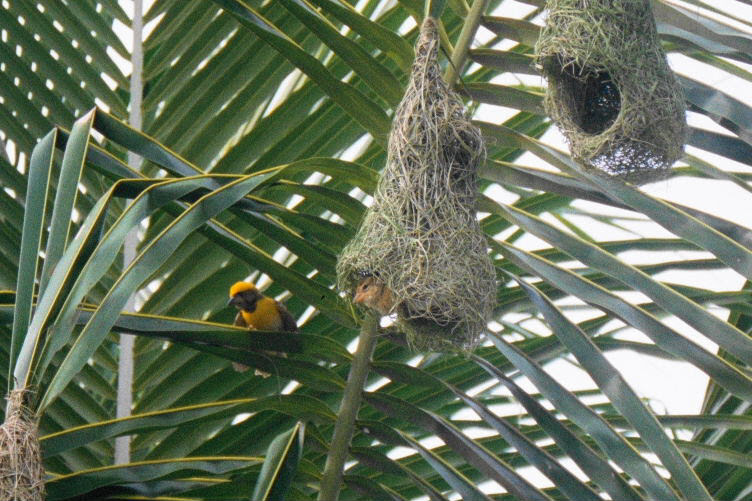 Image Source
The name of the bird comes from the unique markings/coloration of the bird, as well as how these birds weave intricate nests.
Montezuma Oropendola 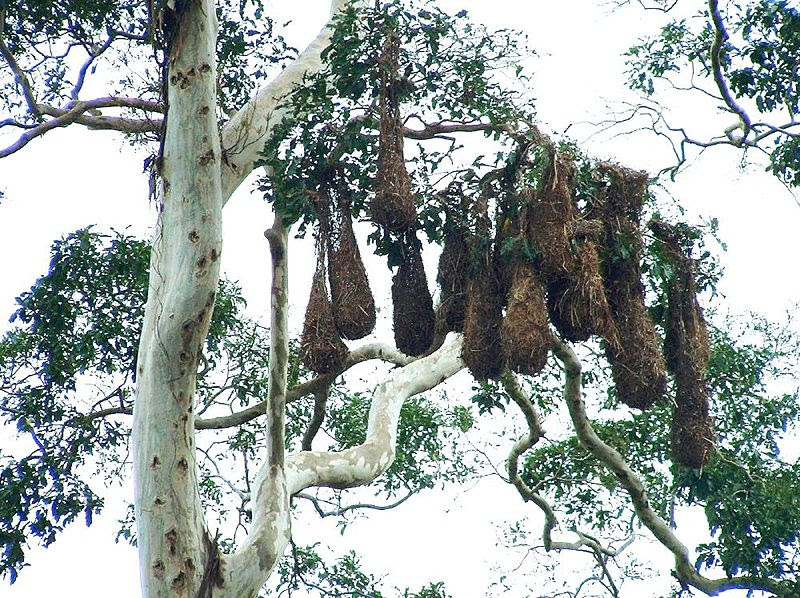 Image Source
The nests above are Colonial pendant nests of Montezuma Oropendola. It was photographed in Alahuela Province, Costa Rica. Its scientific name is Psarocolius Montezuma. It can be found in Central America.
Common Blackbird

Image Source
The Cup type nest above belongs to Common Blackbird or Turdus merula. Their nest is simply beautiful. They are also known as Eurasia Blackbird.
Village Weaver 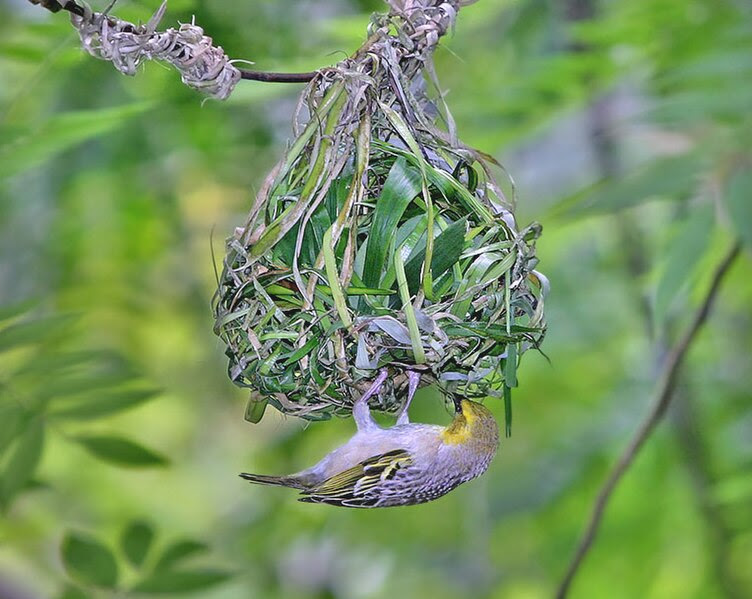 Image Source
Another great nest weaver is the Village Weaver. They build pendant type of nest. Its binomial name is Ploceus cucullatus and is also known as the Spotted-backed Weaver or Black-headed Weaver. It can be found in sub-Saharan Africa.
Great Reed Warbler 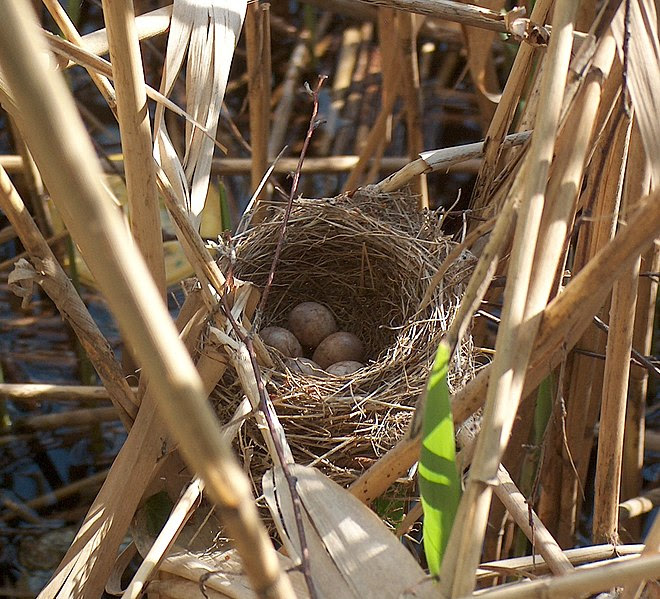 Image Source
The nest above is a cup type nest built by Great Reed Warbler (Acrocephalus arundinaceus). It is a Eurasian songbird.
Snowy Egret 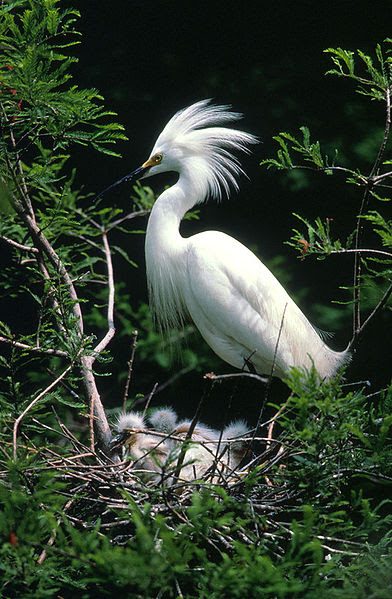 Image Source
Like Eagles and Ospreys, Snowy Egrets build Platform type of nest. Snowy Egret or Egretta thula is a white heron that can be found in Bahamas.
Cacique 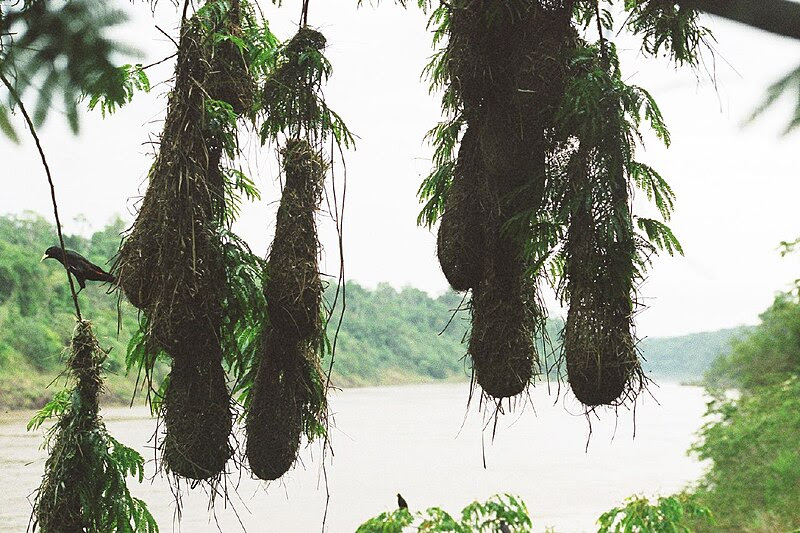 Image Source
Caciques build pendant type of nests. They can be found in Central and South America.
See also
Posted by Nobert at 4:15 AM