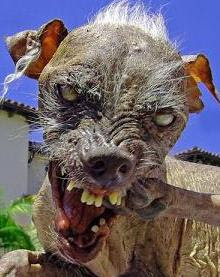 
Absurd it seems but Sam, a blind pure-breed Chinese Crested Hairless Dog is regarded as the “ugliest dog to ever live in the world. He was born in November 1990 and died on November 18, 2005. He was blind and was 3-time champion of the annual Sonoma-Marin Fair World’s Ugliest Dog Contest in California, USA from 2003 to 2005. Because of his ugliness, Sam gained him international fame and starred on TV show.
Read more ...
Posted by Nobert at 5:14 PM