A few snake species are extremely beautiful for their colorful and uniquely patterned skin. Here are some beautiful snakes you may want to consider as pets.
Except for the Blood Pythons, these snakes don’t grow more than 4 ft.
Short Python (Python curtus) Image Source
Short Python or Blood Python is a non-venomous snake native to Southeast Asia. It is heavily built and its tail is extremely short relative to the overall length. The color pattern consists of beige, tan or grayish-brown ground color overlaid with blotches that are brick to blood-red in color. 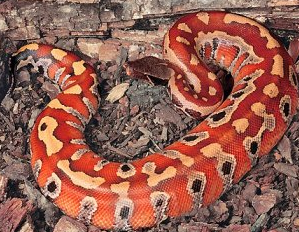 The species is kept as an exotic pet. This beautifully patterned and colored snake has been extensively harvested for leather. An estimated 100,000 individuals are taken for this purpose annually. It is also known for many other common names such as Short-tailed Python, Black Blood Python, Sumatran Short-tailed Python and Sumatran Blood Python. They feed on a variety of mammals and birds.
Rhinoceros Viper

Image Source
Rhinoceros Viper is also commonly known as River Jack. Its formal name is Bitis nasicornis. If you decide to take this as a pet you should remember that it is a venomous viper species though there are no recorded cases of death yet.
It can be found in the forests of West and Central Africa. This beautiful snake is known for its striking color pattern and prominent horns on its nose. It is large and stout and can attain a length of up to 107 cm.
In captivity, it hardly ever leave its hide box, even when hungry, and once waited for three days for a live mouse to enter its hide box before striking. Its diet includes small mammals, toads, frogs and fish.
Ball Python Image Source
One of the most popular short species of snake for a pet is the Python regius, commonly known as Ball Python. This is highly recommended as a reptile pet because it is non-venomous. It can be found also in African and is the smallest of the African pythons. Ball Pythons are popular in the pet trade. Another common name of this cute-looking snake is Royal Python.
This reptile has the tendency to curl into a ball when frightened or stressed hence the name Ball Python. This stocky animal with small head and soft skin does not grow more than 120 cm. Females are larger than males. Ball Pythons are bred in captivity and are popular as pets, because of their small size compared to other pythons and their docile temperament.
Ethiopian Mountain Adder

Image Source
The Ethiopian Mountain Adder or Bitis parviocula is another venomous viper species that can be found only in Ethiopia. This large and stocky viper snake with a broad head is characterized by spectacular geometric markings. It can grow up to more than 2 ft or 75.2 cm in length. Like the Rhinoceros Viper, the Ethiopian Mountain Adder features a very short tail.
Red Blood Python (Python curtus brongersmai)

Image Source
Red Blood Python, also known as Malayan Short Python, is a non-venomous snake found on the Malay Peninsula. It can attain a length of up to 182 cm and can weigh as much as 9 kg. Females are usually larger than males. This snake is gradually becoming more common among herpetoculturists. The snake is part of a commercial harvest for leather because of its beautiful and impressive markings.
Bitis Gabonica Rhinoceros

Image Source
Another beautifully colored and uniquely patterned viper is the Bitis Gabonica Rhinoceros or Bitis gabonica gabonica. This bulky venomous snake subspecies can be found in Central Africa. This stocky and bulky snake has a set of large nasal horns. Although the snake is venomous, no fatalities have recorded yet. It has a very short tail like the Ethiopian Mountain Adder and River Jack.
See also
Posted by Nobert at 9:18 AM