Black is an elegant color and having a black dog is having an elegant pet. Here are some black breeds of dog for you to choose from if you are planning to buy one.

Image Source
The Tibetan Terrier is a black breed of dog that originated in Tibet, despite its name, it is not a member of the terrier group, the name being given to it by European travelers to Tibet who were reminded of terriers from Europe. Tibetan Terrier is a very useful pet It can be a guard dog, a herd dog and a companion dog. Its Tibetan name is Tsang Apso which means "shaggy or bearded (apso) dog.
2.) Swedish Lapphund 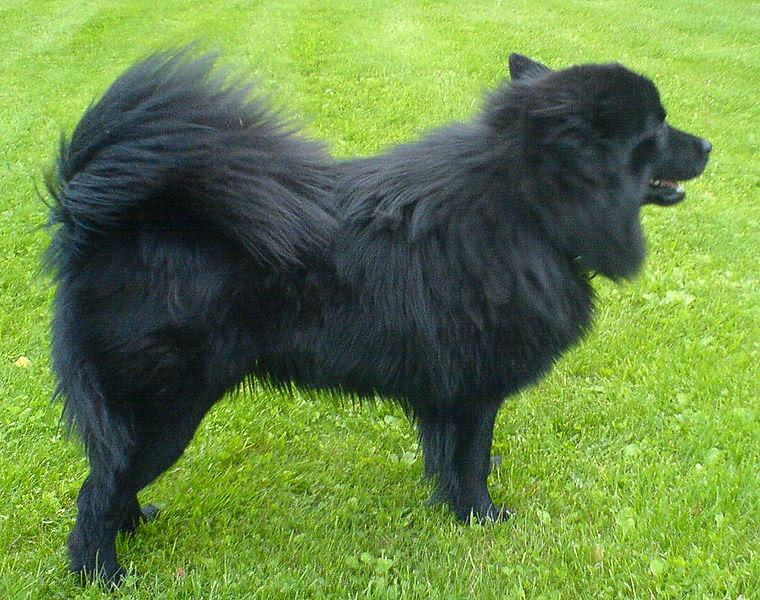 Image Source
The Swedish Lapphund is a black dog breed that originated in Sweden. It was developed and used for guarding and herding the reindeer of Sami people. The expression "the black beauty of Norrland" is very often attributed to the Swedish Lapphund, Its Swedish name is Svensk lapphund.
3.) Scottish Terrier 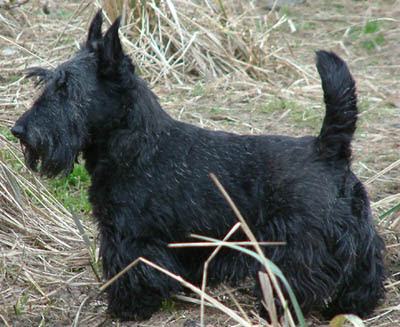 Image Source
The Scottish Terrier, or more popularly called the Scottie, is a black dog breed that originated in Scotland. The Scottish Terrier is an independent and rugged breed with a wiry outer coat and a soft dense undercoat. This territorial and feisty dog can make a good watchdog and tend to be very loyal to its family. It is also known as the Aberdeen Terrier
4.) Schipperke 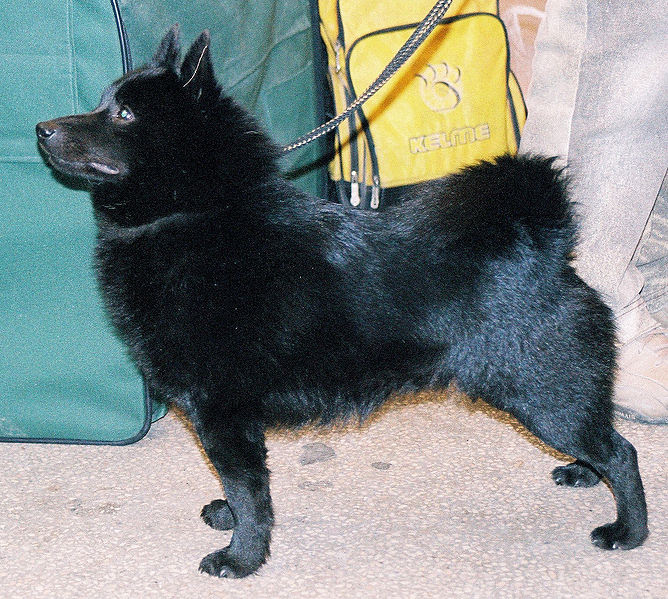 Image Source
The handsome-looking Schipperke is a small black dog breed that originated in Belgium. It has been around since the 16th century. A Schipperke is double coated with a soft, fluffy undercoat that is covered by a harsher-feeling and longer outer coat.
5.) Giant Schnauzer 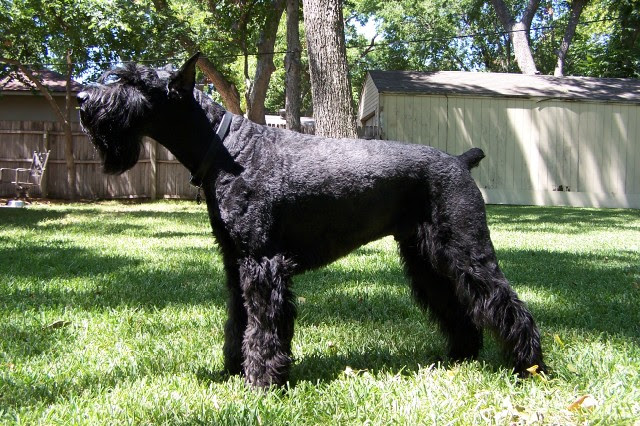 Image Source
The Giant Schnauzer is a black dog breed that needs a fair amount of exercise. This large, powerful, and compact dog breed has a harsh, wiry outer coat and dense, soft undercoat. It can also be salt and pepper (gray). This large dog can weigh as much as 45 kg and can attain a height of up to 70 cm at the withers.
6.) Puli 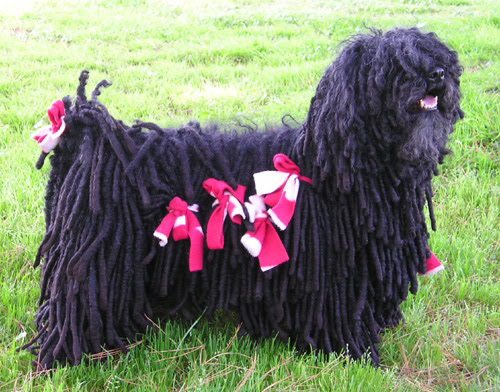 Image Source
The Puli is a unique dog that originated in Hungary. It is nown for its long, corded coat. It is a herding and livestock guarding dog with waterproof coat. The Puli is a solid-colored dog that is usually black. Other less common coat colors are white, gray and cream.
7.) Portuguese Water Dog 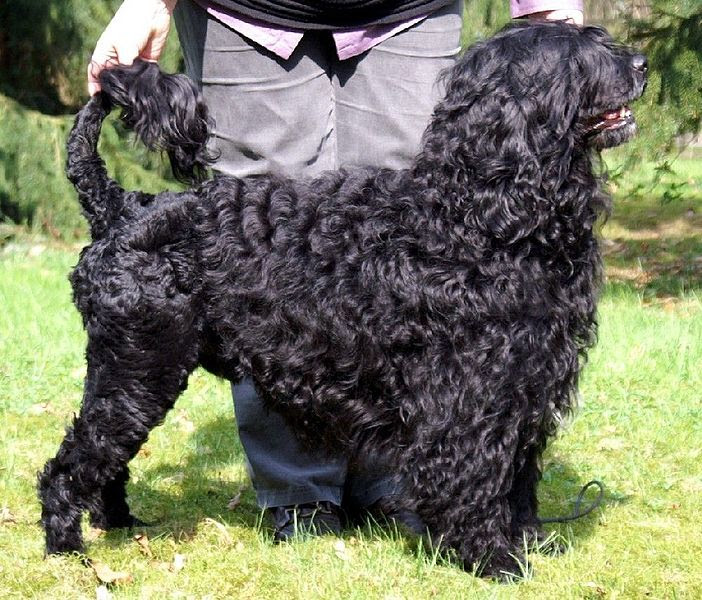 Image Source
The Portuguese Water Dog is an all-black dog breed that originated in Algarve, Portugal. This working dog was taught to herd fish into fishermen's nets, to retrieve lost tackle or broken nets, and to act as couriers from ship to ship, or ship to shore. Portuguese Water Dogs were often taken with sailors during the Portuguese discoveries.
8.) Mudi 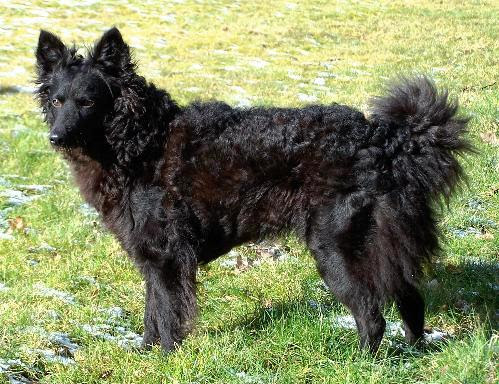 Image Source
The Mudi is a rare herding black dog breed that originated in Hungary. It has curly or wavy coat with short hair on the face and legs. It can also be brown, white, fawn, and black merle. Mudis have short tails which may be born long and docked short or born naturally short.
9.) Belgian Shepherd Dog 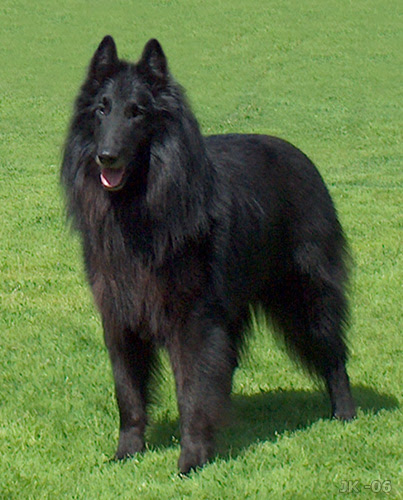 ImageSource
Another all-black dog breed that originated from Belgium is the Belgian Shepherd Dog. This breed is recognized under the name Belgian Sheepdog in the United States. Its Belgian name is Groenendael. This medium-sized but hard-working sheepdog is recognized by its distinctive black coat.
10.) Barbet

Image Source
The Barbet is an all-black dog breed that originated in France. This medium-sized dog is a retriever, flushing dog and water dog. The Barbet is a rare breed and most Barbet are entirely black. It can also be black and white or brown.
11.) Affenpinsche 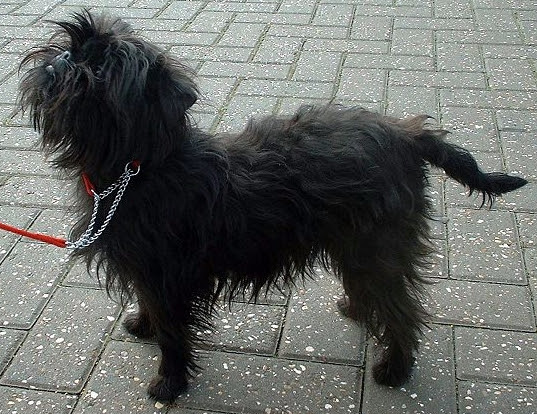 Image Source
The Affenpinscher is an all-black terrier-like toy dog breed with harsh rough coat and a monkey-like expression. This dog breed is from Germany and the word Affe is German which means monkey. It also comes in different colors. The Affenpinscher has a shaggy, wiry-type coat.
See also
Posted by Nobert at 10:48 PM