The World’s Most Colorful Large Snakes for Pets

Extra large snakes are popular attractions in zoos from around the world. There are several large snake species to choose from but only a few are brightly colored although most of them are uniquely patterned.
Here are the most colorful large snakes in the world for pet.
Albino Burmese Python (Python molurus bivittatus) 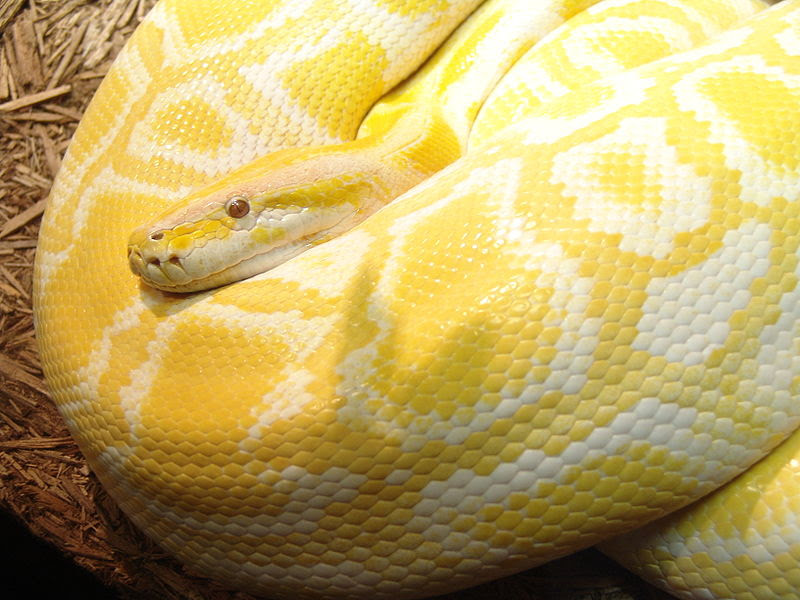 Image Source
The Albino Burmese Python is one of the most beautiful large snakes in the world. It is also one of the largest and native to . It can grow to a length of up to 19 ft or 5.8 meters.
Brazilian Rainbow Boa (Epicrates cenchria cenchria) 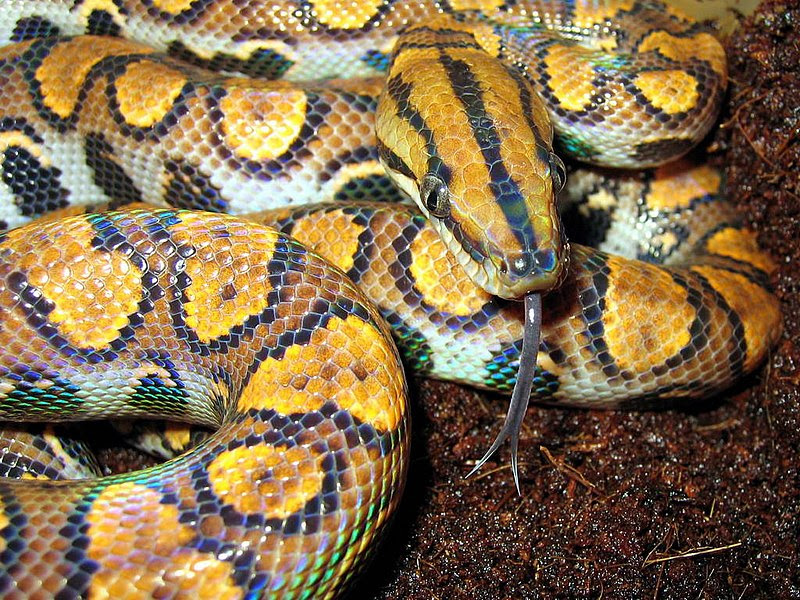 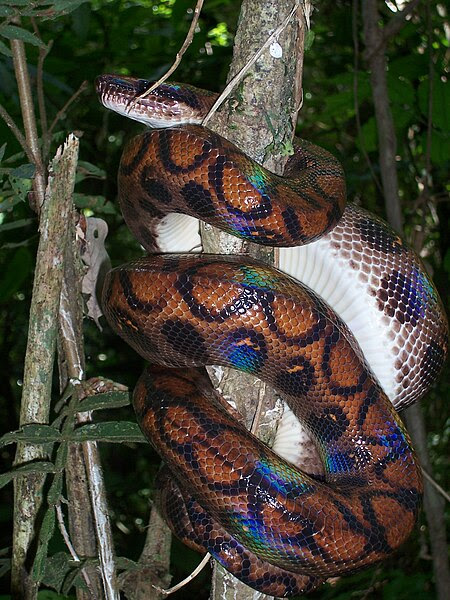 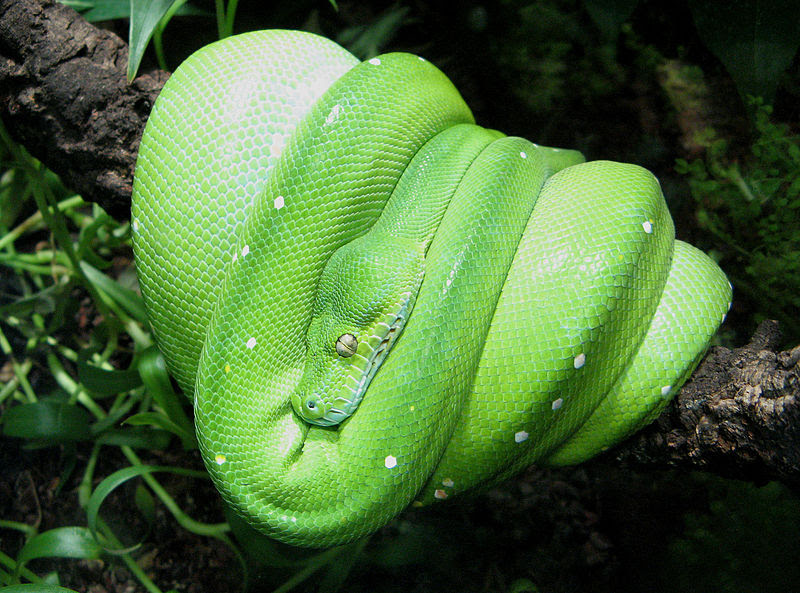 Image Source
The Green Tree Python is a large bright green snake with white spots. This beautiful snake is endemic to and and part of . It can grow up to 200 cm or 6.6 ft in length. It feeds on small mammals, such as rodents, and sometimes reptiles.
Boelen Python ( boeleni) 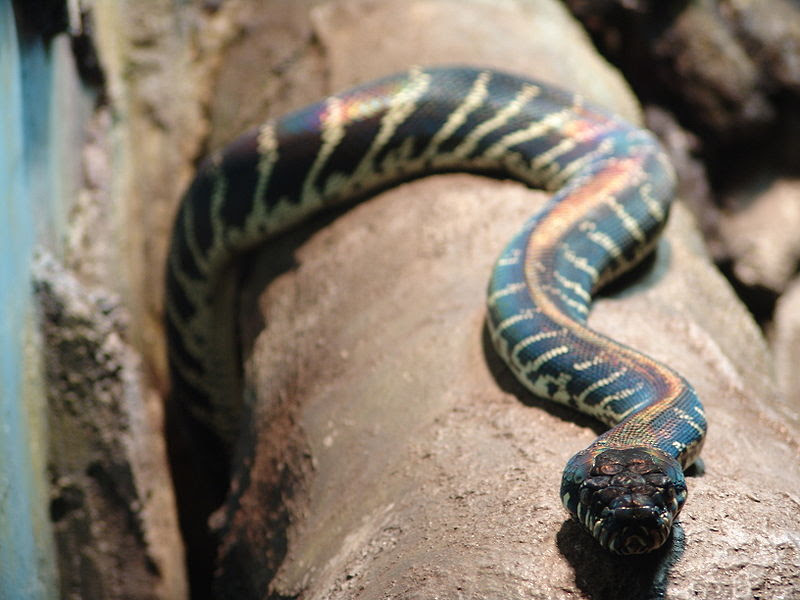 Image Source
This colorful large snake is commonly known as Boelen Python. This huge non-venomous snake is native to . This beautiful snake is considered to be highly desirable by private keepers due to its beauty, but is also exceptionally rare in collections
Diamond Python ( spilota spilota) 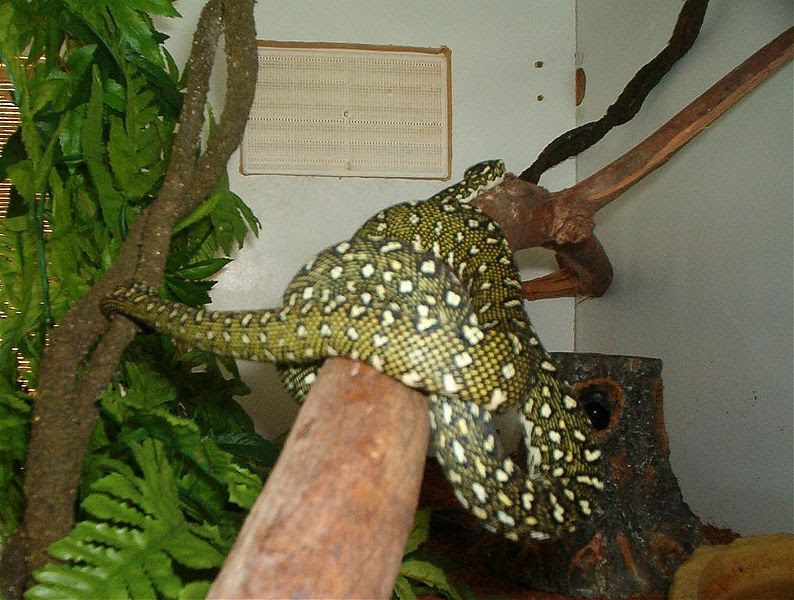 Image Source
The Diamond Python is a large snake of . It was commonly named Diamond Python due to the presence of numerous clusters of yellow/cream scales that form 'rosettes' that look a bit like diamonds. It can grow up to 4 meters in length and is commonly kept in captivity by collectors in and around the world. Its diet includes rats and other rodents
Macklot's Python (Liasis mackloti savuensis) 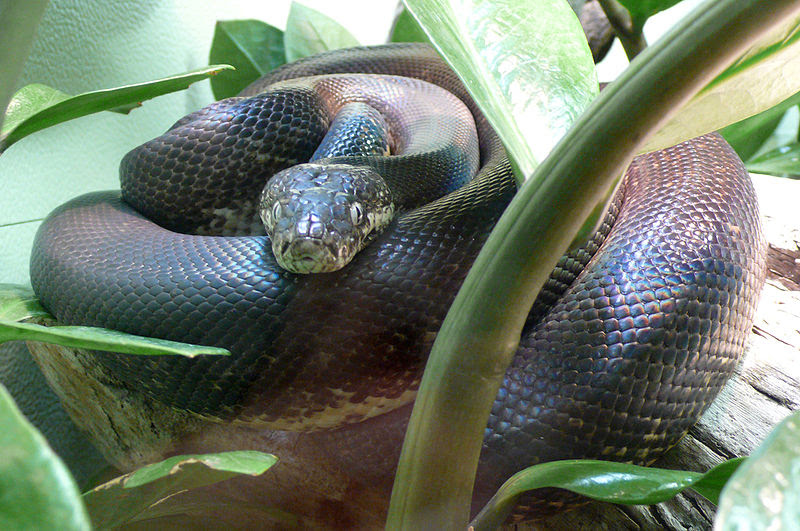 Imager Source
Macklot's Python is a non-venomous subspecies endemic to . Prospective owners should remember that this huge snake has a reputation for being an irritable snake. It can grow up to Adults may grow to 7 feet or 213 cm in length or longer. This colorful snake breeds easily in captivity.
Caramel Burmese Python (Python molurus bivittatus) 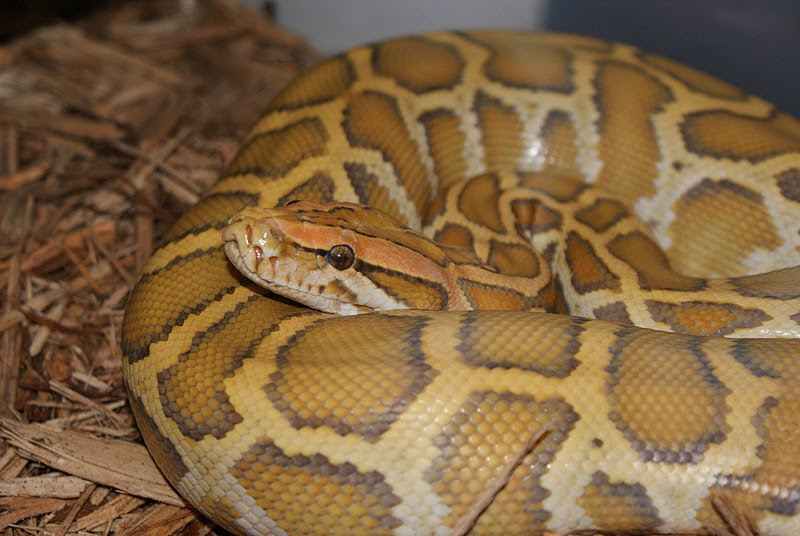 Image Source
Burmese Python grow fast. In a span of 1 year it could attain a length of 7 ft. It is often sold as pet and is made popular by its attractive color and apparently easy-going nature. This powerful snake also consumes large amount of food and due to its size it requires large, often custom-built, secure enclosure, which can be very expensive.
Reticulated Python (Python reticulatus) 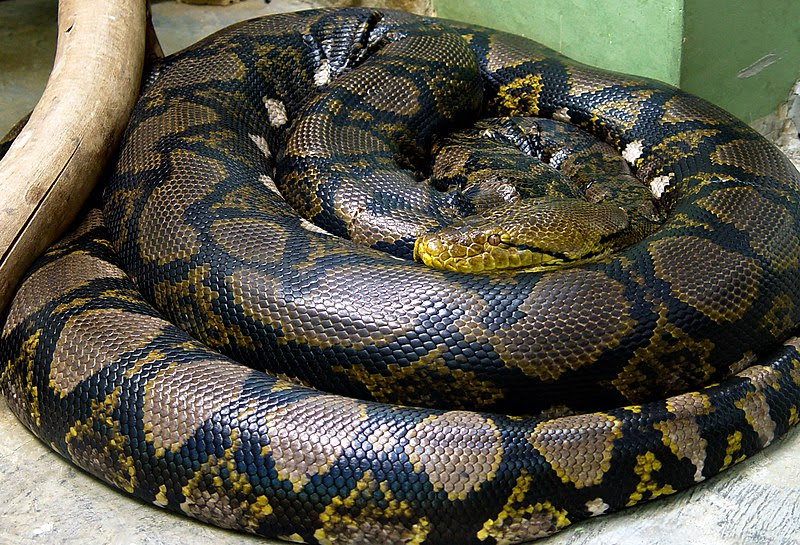 Image Source
The world’s longest snake and reptile, Python reticulates of , is often kept as exotic pet for its beautiful markings or patterns. It can grow up to a length of 28 ft or 8.7 meters. This non-venomous snake is normally not considered dangerous to humans. Reticulated Python as a pet is not recommended to amateurs.
Emerald Tree Boa (Corallus caninus) 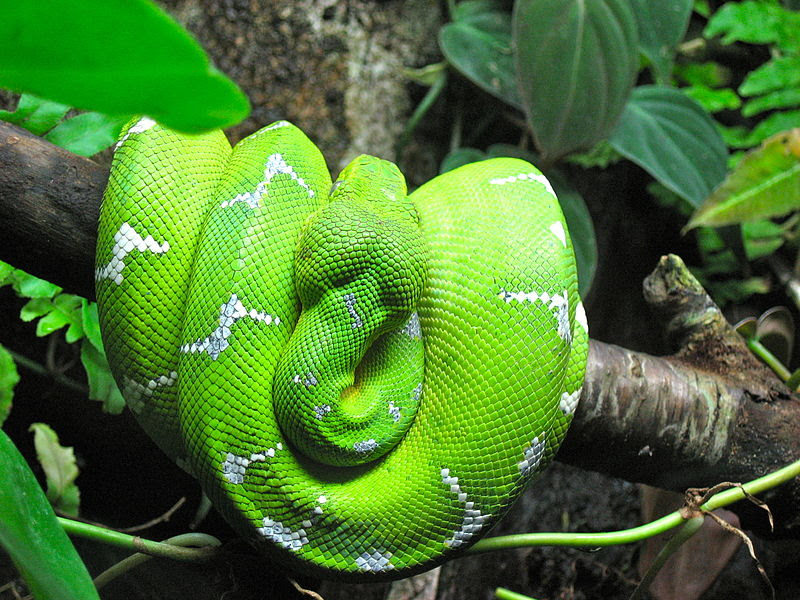 Image Source
Emereald Tree Boa, which resembles the Green Tree Python, is a large brightly colored snake often kept as an exotic pet. This non-venomous snake is native to and can grow up to 6 ft or 1.8 meters in length. 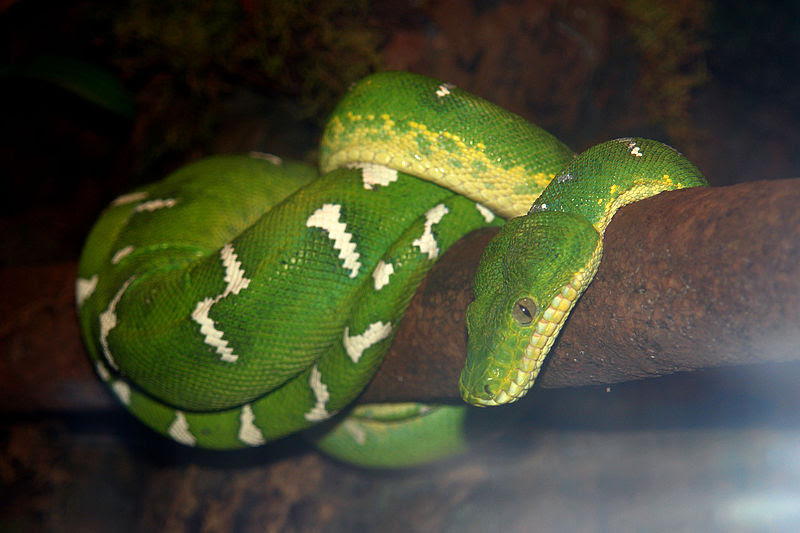 Image Source
It is distinguished from the Green Tree Python for its white irregular interrupted zigzag stripe or so-called 'lightning bolts' down the back and a yellow belly. It feeds mostly on small mammals, but they have been known to eat some smaller bird species as well as lizards and frogs.
Angolan Dwarf Python (Python anchietae) 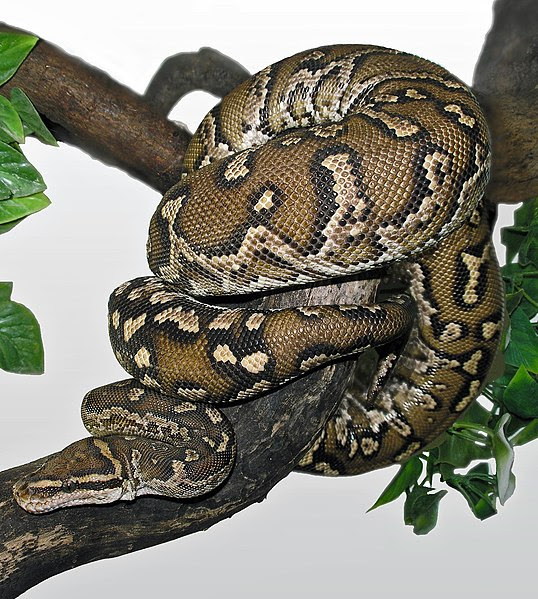 Image Source
Although the common name of Python anchietae is Dwarf Angolan Python, this snake can grow up to 6 ft in length. It is native to and in .  This reddish-brown bulky snake with yellow belly is a non-venomous one which is a rare species seldom seen in the wild or in captivity. It is the only known python to have "bead-like" scales and its diet consists of small mammals and birds. It was once one of the most expensive pet with a price of more than $20,000 USD. Today, it can be purchased for as little as $1,000.
See also
Posted by Nobert at 9:09 PM