Amazingly Bizarre Facts About Extraordinary Arthropods in the World

Arthropods are invertebrate animals having exoskeleton (external skeleton), segmented body, and jointed appendages. Scorpions, butterflies, crabs, centipedes and many others are examples of Arthropods.
Arthropods can be found anywhere in the world. There are aquatic, arboreal and land-dwelling arthropods.  There are thousands of arthropod species in the world. Let’s find out what species are amazingly extraordinary.
Have you seen a Horseshoe Crab? This creature is absolutely fantastic. It has a strange shell. It also has 12 legs and the color of its blood is blue. This real blue-blooded animal also has 10 amazing eyes that can see Ultraviolet Light. Image Source
Male Fiddler Crab has two uneven claws, a big one and a small one. The big claw is for fighting and the small claw is for eating.

Image Source
Scorpions are deadly arthropods. These venomous critters kill more than 1,000 people annually. Scorpion mothers are not-so-good mothers. If young scorpions stay on the mother’s back too long, she might eat them. Image Source
Christmas Island Red Crabs are amazingly fantastic arthropods. Incredible it seems but there can be up to 120 million individuals in a swarm. They gather on the beach of Christmas Island to mate.

Image Source
Krill are important diet to many aquatic creatures. One swarm of Krill can cover an unbelievable area of 173 square miles.

Image Source
Male Giant Water Bugs are amongst the most loving and caring fathers in the animal world. They carry 700 young on their back.

Image Source
Cockroaches are said to be the inheritors of the planet Earth. Why did they say so? Cockroaches can survive heavy doses of radiation, poison and nine days without their head.

Image Source
Wetas are great and amazing survivors. They can stay frozen for months without frostbite, even when all heart and brain activity ceases and it loses 99% of the water in its body.

Image Source
Some species of Caterpillars can disguise themselves as bird droppings and snakes to fool predators.

Image Source
Smell can kill. A species Millipede smells so bad that it can kill a mouse.

Image Source
Mantis Shrimps are amazing marine creatures. Their eyes can see stuff you can't even imagine. Mantis Shrimps, like Archerfish, are amongst the sharpshooters in the animal world. They could beat the best gunslingers in the west with their strike. 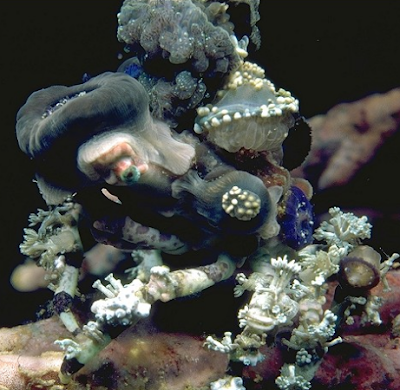 With certainty, you wouldn’t want to be a male Mantis. Why? The male Mantis becomes the female’s meal when mating. That's sexual cannibalism. Image Source
See also
Posted by Nobert at 7:53 AM