Some Animals Are Incredibly Amazing Two

There are hundreds of thousands species of animals and some of them are amazingly extraordinary and unique. Here are some of the unusual species in the animal world.

Image Source
Pistol Shrimps are among the loudest creatures in the world. Their specialized claws can generate noise over 200 decibels. A jet engine at takeoff is 170 decibels while the loudest human is 129 decibels. Image Source
Hammerhead Sharks have excellent vision, smell, and a 6th sense detecting electrical fields, pinpointing its general location in the ocean. They can also sense 1/1,000,000,000th of a volt, which is like a human sensing that a flashlight, had turned on 1,600 km away. They also have a 7th sense, by seeing the invisible grid of the ocean walls; it knows its exact location in the ocean.

Image Source
Fight and kill to be born! Yes, baby Sand Tiger Sharks fight, kill, and eat each other in the womb and only one shark pup survives. Image Source
Right Whales have the biggest mouth of any animal. Their mouth is 20% of their body length. Image Source
Catfish steals and eats cichlid eggs and swaps them with their own so the cichlids end up hatching the catfishes' eggs. Image Source
Lesser Floricans can jump up to 6 feet to attract a female. These creatures are among the rarest animals in the world. Image Source
House Cats are truly fantastic because they are the only cats that hunt for fun and they hunt over 1,000 species such as mice, rats, beetles, birds, guinea pigs, rabbits, fish, lizards and small snakes.

Image Source
A vampire bat feeding on a pig
Vampire Bats have to drink more than its own weight in blood everyday just to survive. If Vampire Bats were humans, that would be like drinking a bathtub's worth of blood.

Image Source
In a single litter, a Tasmanian devil can give birth to 30 pups, but only four survive.

Image Source
Hummingbirds are among the most voracious eaters in the world. They are blessed because they can eat 60 meals a day without getting fat due to fast metabolism. Don’t wish you are a Hummingbird, it might come true. 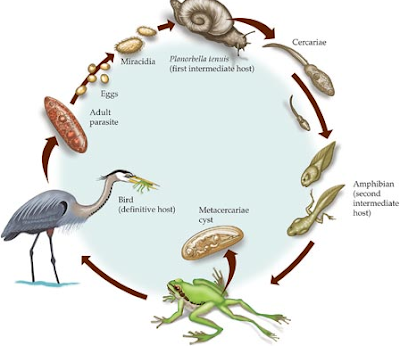 Image Source
Ribeiroia starts in a heron which excretes the Ribeiroia eggs out which go in and out of a Snail, goes into a tadpole, the tadpole turns into a frog, and it makes the frog grow extra limbs, which is a sitting duck for herons, where the flatworm lays eggs and the cycle starts all over again.
See also
Posted by Nobert at 1:35 PM